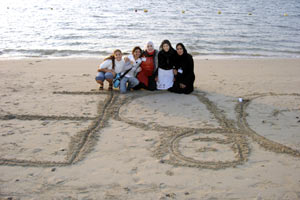 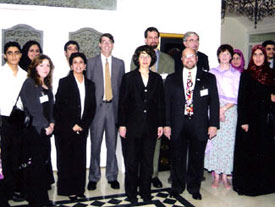 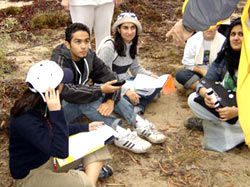 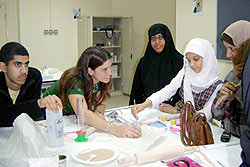 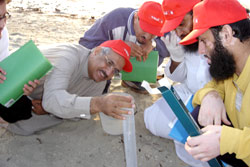 During December 4-12, over 70 individuals from 6 countries attended a GLOBE Train-the-Trainer Workshop in Muharraq, Kingdom of Bahrain. The Bahrain Ministry of Education graciously hosted the workshop with the support of the U.S. Embassy. Mrs. Zakeya Ali Ahmed, Bahrain Country Coordinator, along with a team of GLOBE student volunteers, organized the workshop and made sure that the workshop was a success. The workshop was held at a new facility, the Sheikh Khalifa Bin Salman Institute of Technology.

The training team consisted of trainers from Bahrain, Jordan, Lebanon, Qatar, Saudi Arabia and the United States. Scientists from the Meteorological Center, Arabian Gulf University, and Bahrain University worked closely with the trainers and participants to demonstrate the relevance of the GLOBE protocols to Bahrain and specific research being conducted locally. Dr. David Brooks, GLOBE Science Principal Investigator for Aerosols, Water Vapor and UV-A, taught the GLOBE Atmosphere protocols. His participation helped to initiate science collaborations involving GLOBE schools between Bahrain and the United States.

The U.S. Ambassador, Mr. William T. Monroe, stated "It is fitting that this workshop take place shortly after the GLOBE Program received the Goldman Sachs Foundation Prize for Excellence in International Education in the Media and Technology category. This award comes as a direct result of the hard work of all GLOBE Partners, Teachers and Students."

This workshop demonstrated the close collaboration between Partners, Teachers, Students, and Scientists. All worked closely together to learn from each other and develop lasting friendships and working collaborations, and appreciated the opportunity to interact with key GLOBE representatives in the Region.

Mr. Frank Niepold, GLOBE trainer and teacher at Edmund Burk School in Washington, DC, U.S., also joined the GLOBE training team at this workshop. He will continue to work with teachers and students in the Middle East region on student projects and exchanges. National representatives from the Middle East met to discuss regional collaborations and ways to coordinate GLOBE activities and events.

The closing ceremony was attended by the Minister of Education, Dr. Majid Bin Ali Al-Nuaimi, Ambassador Monroe, participants, trainers, scientists, students, and parents. GLOBE student, Sarah Yousif A. Karim, summed up the workshop in her speech by saying, "So overall, we've been talking about "Training" all of the time but how valuable is it? Training for this workshop is like training for an athletic sport. The athletic contest only lasts for a few minutes while training for it takes days and weeks to improve self effort. And that's what we did during these days."

Zakeya Ali expressed her deep appreciation for her team. Their efforts were key in making this event a success. Visit our Bahrain Train-The-Trainer Workshop Photo Gallery: http://globe.gov/fsl/bahrain/