GLOBE Students in France and the U.S. Expand Collaborative Activities


The ongoing relationship between GLOBE teachers Kathy Rome, from Bison, Kansas, USA, and Mehdi Rajade and Virginie Godechoul, GLOBE teachers from Andernos-Les-Bains, France, has continued to flourish. After initially meeting via a Web conference May 2007, they finally met face-to-face at the AIM/CloudSat satellite workshop that took place in Alaska in June 2007. Also in attendance at the workshop were GLOBE U.S. Partners Dr. Paul Adams, a Kansas Fort Hays State University professor and CALIPSO educational outreach instructor, Dr. Dianne Robinson, atmospheric science professor at Hampton University in Hampton, Virginia, and Yves Darbarie, GLOBE teacher from Bordeaux, France. Together they began to develop a plan for a trip to France with the purpose of developing collaborative teaching tools for involving students in the CALIPSOproject. CALIPSO (Cloud-Aerosol Lidar and Infrared Pathfinder Satellite Observation) is a satellite gathering atmospheric measurements to help us learn more about how clouds and aerosols play a part in regulating the Earth's weather, climate and air quality, and is a joint effort of NASA in the U.S. and CNES (the Centre National d'Etudes Spatiales) in France. 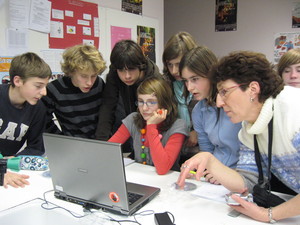 In February 2008, Ms. Rome, Dr. Adams and Dr. Robinson traveled to France to work with Danielle De Staerke, Director of Education at CNES andGLOBE France Country Coordinator, and her team of scientists and educators. While visiting the schools, the three presented information on the CALIPSO satellite and guided the students through activities related to aerosols. They worked with the high school students of Yves Darbarie at Lycee Gustave Eiffel School in Bordeaux and also an 8th and 9th grade group under the direction of Mehdi and Virginie at the College A. Lahaye in Andernos-Les Bains. Along with approximately 40 French teachers, they participated in the GLOBE Atmosphere Workshop, directed by Professor De Staerke who is also a GLOBE Atmosphere protocol master trainer. 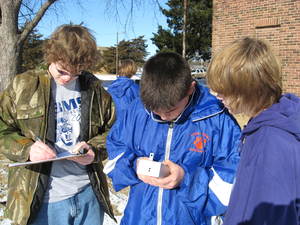 Before Ms. Rome went to France, her class had been collecting data using both the French-made and American-made versions of the GLOBE Sun Photometers, automated instruments that measure the intensity of light arriving directly from the sun. The new French Sun Photometers are being field tested by Ms. Rome's students, who are also involved in reporting visual observations of clouds and aerosol haze conditions. On a daily basis, Ms. Rome's students head outside in the cold winter air to the small white-shuttered box, their school's GLOBE Instrument Shelter, which helps them monitor the daily weather. On sunny says, the students line up the American and French-made sun photometers, record optical thickness, and forward their data to the GLOBE Web site and to Dr. Adams, at Fort Hays as well. From Dr. Adams's perspective, the greatest benefit to students everywhere is feeling that they can be a valid part of scientific research. "They may become better stewards of the planet as well as learn a lot about science and the worldwide aspect of scientific questions and problems." The pay-off for Kathy Rome's students also comes from the inter-cultural nature of the exchange. The experiment is allowing them to learn more about French culture, and to view the world as vast and yet accessible. 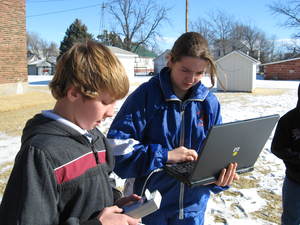 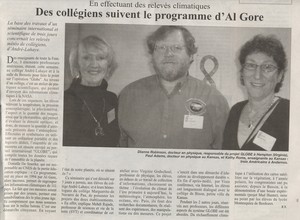 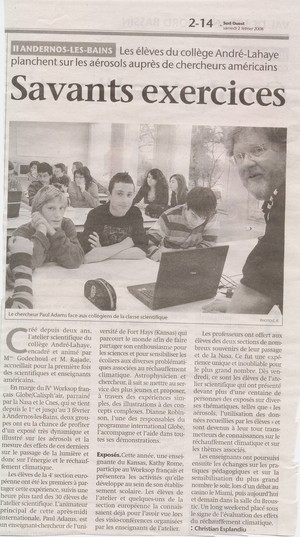