The German county of North Rhine–Westphalia (NRW) is the westernmost and -in terms of population and economy- the largest Federal State in Germany. The students and teachers in NRW actively participate in many of the educational initiatives of GLOBE Germany.

There are 98 registered GLOBE schools in the county engaged in collaborative student research. Thanks to considerable commitment from the NRW government, the German students in these schools have made great strides toward gaining scientific understanding of their local environment and are actively sharing their research with their peers around the world.

NRW is modeling high standards for student performance among GLOBE schools in Germany. Four NRW schools were among the ten top-performing 2007/08 GLOBE Germany Schools of the Year : Gymnasium Schloß Neuhaus in Paderborn, Ernst-Barlach-Gymnasium in Unna, von-Galen-Schule in Warendorf and Montanusrealschule in Leverkusen. 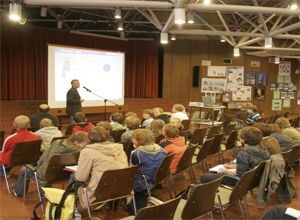 The GLOBE-NRW Students' Congress is an annual event that has been taking place since 2000, bringing the students of the various schools across the county together to meet in one of their GLOBE schools. In 2008, the Congress was held in the Gymnasium Schloß Neuhaus. The event proved to be popular among the students and was widely attended. Participation was enhanced by experts in nature and environmental conservation who gave lectures to the students and introduced them to the varied aspects of current research on climatology. Students presented findings of the GLOBE research they had conducted throughout the year. 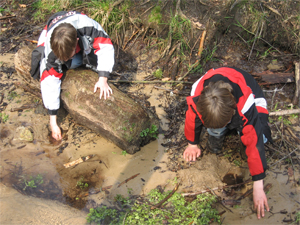 A recent project underway by GLOBE Schools in NRW is a collaborative study of the county's rivers. The picture on the left shows a project taking place on the River Ems.

GLOBE-NRW is actively promoting the "Prima Klima" (Good Climate) network as an important topic for further research. This project has been placed into the "Transfer-21 NRW" component of the "Agenda 21 in Schools and Youth Work NRW" of the county's government-approved curriculum. "Prima Klima" supports the goal of the United Nations Decade of Education for Sustainable Development (2005-2014), which is to integrate the principles, values, and practices of sustainable development into all aspects of education and learning. This important environmental initiative works hand-in-hand with the schools across NRW. As a result of this association, further development of GLOBE in Germany will have a solid foundation. Collaborative projects, such as those encouraged in NRW, permit teaching to reach beyond the sciences, across the curriculum, encompassing the arts while widening the students' capabilities in dealing with scientific issues.