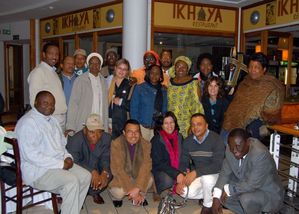 The meeting began with presentations identifying the programmatic priorities of GLOBE by Dr. Teresa Kennedy, Dr. Emmett Wright, and Dr. Russanne Low. Mrs. Margaret Besong and Mr. Mark Bretteny, Co-Chairs of the GLOBE Learning Expedition Organizing Committee, presented the annual report of the GAC, followed by an examination and discussion of the GLOBE Africa Consortium agreement. Following this activity, country status reports were presented, where Country Coordinators showcased accomplishments and discussed obstacles to widespread implementation of GLOBE in their countries.

Upon completion of the country presentations, Mr. George Nditafon, Cameroon, facilitated a workshop activity where the Country Coordinators worked together to develop cross-cutting consortium-wide research projects. Mr. Nditafon was assisted by a local scientist, Mr. Brian Delcarme, from Cape Peninsula University of Technology, South Africa, both of whom provided presentations on project development and student engagement in research with scientists. 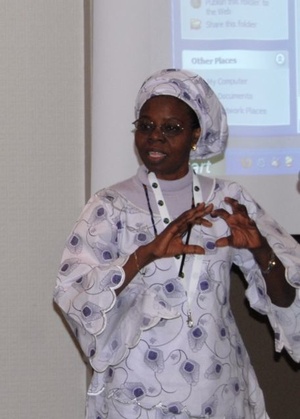 From the group work, two projects were ultimately identified that hold widespread relevance and interest for GLOBE students and regional governments alike. The first project focusing on the impact of climate change on malaria in Africa, builds on the protocol development and research conducted by students in Madagascar and Benin. The second project engages students in the examination of climate change and its impact on the vegetated landscape. A workgroup was tasked to further develop each of the projects for continent-wide participation. Mr. Paul Randrianisoa, Madagascar, and Ms. Alidjennatou Emmanuel, Benin, will chair the climate change on malaria project, and Dr. Celestin Ntivuguruzwa, Rwanda, will chair the project focusing on climate change and its impact on the vegetated landscape.

Dr. Diola Bagayoko, USA, delivered a presentation on Sustainability of GLOBE in Africa. He emphasized the importance of research as a focus, not only for meeting student learning objectives but also for establishment of funding sources for GLOBE activities from governmental and nongovernmental sources. Dr. Bagayoko's presentation stimulated discussion about the need for publicity materials to engage governmental and scientific organizations in Africa with GLOBE community networks. As a consequence, two ad-hoc communities were formed to address the development of a public presence for the GLOBE Africa Consortium, one targeting website development, and another in the creation of a brochure that can be distributed to government agencies, ministries and NGOs. 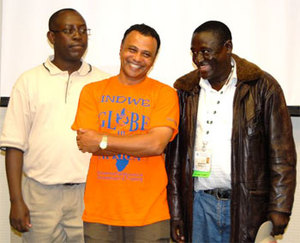 The Consortium addressed the need for a regional Master Trainer Workshop, and asked for volunteers to host the upcoming workshop for the 2008-2009 year. Dr. Mekuria Argaw, Ethiopia, stated his willingness to host the next workshop, scheduled to occur in early 2009. He will be working with the GAC to develop the workshop proposal in the coming months. It was noted that the initiative to secure outside funding for GLOBE activities will hopefully result in increased availability of Master Training Workshops in other countries and support the GLOBE Africa Regional Research Initiative.