For decades, garbage trucks deposited New York City's waste in two large landfills adjacent to Jamaica Bay on the south shore of Brooklyn and Queens just minutes from John F. Kennedy International Airport. The combined 400-acre Pennsylvania Avenue/Fountain Avenue landfill site was a local eyesore, to say nothing of its effects on the nose and throat, and requited Superfund cleanup that began in the late 1980s. Today, years of renovation work by the New York City (NYC) Department of Environmental Protection and New York State (NYS) Department of Environmental Conservation are nearing the goal of converting these former environmental disasters to a remarkable park that will be turned over to the National Park Service, Gateway National Recreation Area, for the enjoyment of all New Yorkers. 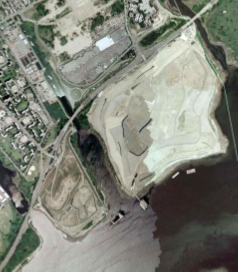 The landfill was capped with an impermeable membrane and covered by millions of tons of sand and 220 million cubic yards of topsoil brought in by barge. Tens of thousands of native trees and shrubs were planted in an attempt to recreate the coastal grassland environment that existed in the area prior to European settlement. Methane from ongoing decomposition beneath the membrane is being pumped from the former landfills and will be used to generate electricity to operate the park facilities. The photographs below document the change from start, brown mounds populated mostly by rodents to green, grassy hills dotted with islands of trees that have begun attracting birds and mammals not seen in the area for many years.

Community involvement has been intense from the beginning of the restoration project, headed by the Penn-Fountain Community Oversight Committee under the leadership of Mr. Lee Shelley and several local homeowner/renter groups. In 2006, Mr. Shelley, who is trained in GLOBE protocols, asked Norman Cohn, the Science Assistant Principal at Franklin K. Lane High School, and Allan Ludman and Peter Schmidt from GLOBE NY Metro, the local GLOBE Partnership, if GLOBE students could help monitor the long-term impact of the restoration work. After discussions with the City and State agencies overseeing the project, permission was granted for a visit to assess feasibility of GLOBE student research linked to the monitoring initiative. 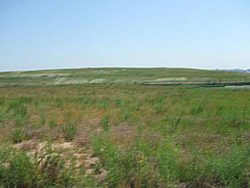 The current plan is for several local GLOBE schools to collaborate in the monitoring effort, each responsible for designated geographic and ecologic areas. Some schools or classes will concentrate on phenology, comparing budburst, green-up, and green-down data from the site with information from nearby areas to see if heat generated by decomposition affects the timing of seasonal changes in the native plant species. Other schools will collect basic atmospheric date to see if the artificial heights (among the highest in Brooklyn and Queens and affording spectacular views of the Manhattan skyline) create microenvironments different from lower, natural settings. Others will track development of soil profiles in the fill above the membrane; monitor hydrology variables in Jamaica Bay and the creek that separates the two former landfills; and track changes in macro invertebrate, fish, and water bird populations over time. 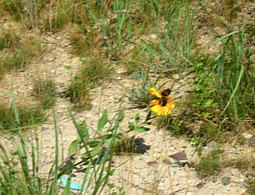 The NYC landfill project offers GLOBE students in New York City an ideal outdoor laboratory for hands-on learning and a remarkable opportunity to make a significant impact on their local environment. Mr. Kevin Caifa commented, "As Principal of Public School 346K, I find personal satisfaction in knowing that our kids will be able to take scientific advantage of an area once left for ruin and which is quickly becoming a haven for wildlife and an environment for further learning." Noting the scope of the opportunity for his students, he continued, "So many children living in urban communities have no connection to the land and the environment. I would like to change that and look forward to working with everyone to get my students involved."

Stay tuned for updates from this extraordinary GLOBE project!