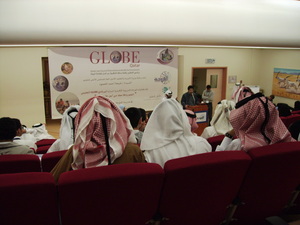 Participants at the Doha, Qatar Workshop
All participants in the regional meeting acknowledged the work produced as a result of the past regional meeting that took place in Jordan in 2006, and agreed to formally create the Near East and North Africa Consortium. Key officers were identified along with specific roles and responsibilities for each position. Read more about the Near East and North Africa Regional Meeting.

The Regional Training event included participation of 20 trainers from the region's Master Trainer Program—nine Master Trainer Leads and 11 Master Trainer Candidates representing seven countries in the Near East and North Africa. Representatives from the Qatari Meteorological Services, as well as several university scientists participated in the event. More than sixty teachers and sixty students from local schools were in attendance for appropriate events throughout the workshop. Read more...