Great Things are Happening in Bahrain

GLOBE Bahrain enjoyed an energetic schedule of 2008 events and, if the 26 January Teacher Training Workshop is any indication, is looking forward to an equally productive 2009. Along with conducting regular teacher trainings for both new and experienced GLOBE teachers, Country Coordinator, Mrs. Wafa Bin Dayna and her team from the Ministry of Education have been working hard to keep the discussion of climate research high on the program's list of priorities and to engage students in the process.

On 14 October 2008, GLOBE Bahrain organized a Teacher Training Workshop at the Shaikh Khalifa Institute for Technology. The Workshop opened with presentations to inform teachers about the history and purpose of the GLOBE Program, and to instruct them in the use of GLOBE protocols as tools to enhance student research. Master teachers focused on training new GLOBE teachers in Atmosphere, Soil, Phenology, Hydrology, and Land Cover protocols and on taking accurate measurements, recording data, carrying out experiments and applying the data to scientific research. Teachers were provided with an opportunity to practice what they had learned at various stations around the site. Assisting, were experienced school directors, teachers, students and other GLOBE participants from the Kingdom of Bahrain. After everyone completed activities in each research station, they were given an opportunity to discuss their findings and results.

Overall, the event was a great success. The teachers learned a great deal about the fundamentals of the GLOBE Program and were actively welcomed and integrated into the GLOBE community in Bahrain. Those who participated in the event completed a questionnaire, in which they expressed gratitude for the workshop and an eagerness to implement the program in their schools. 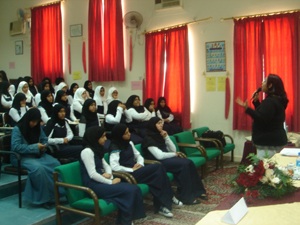 Also in October, from the 21st to the 28th, Bahrain held a series of lectures as the first stage in a three-stage process to engage schools in the Kingdom in the discussions focused on the topic of climate research. More than 500 students from 28 GLOBE schools attended this introductory event, held at five separate school locations. Respected scientists in the area gave presentations on climate change, the Greenhouse effect, and various means for society to reduce its impact on the environment. At the end of each presentation, the floor was open for discussion between students and the lecturer. The students enjoyed the engagement, and gave their own ideas for reducing human impact on the Earth. They were encouraged to voice their own understanding of the issues, so that the scientists could correct any misconceptions about the science behind climate change research and guide students in further examination of the issues. The purpose of these lectures was to discuss research related to climate change, but also they served to educate young people in Bahrain about their local environment and to encourage their future GLOBE research. The GLOBE Program Office congratulates the students of Bahrain who have already begun to embark on an examination of issues driving the GLOBE Student Research Campaign on Climate, which is currently under development at the GLOBE Program Office in collaboration with scientists, educators and students worldwide.

The Kingdom of Bahrain ended 2008 on a very positive note by holding a Green Walk on December 31st at Al Areen Wild Life Center. The participants in the walk were divided into 16 competing groups, with approximately ten people per group. Each group was given a specific route and an allotted amount of time, during which they would have to complete a variety of games and activities at different stations. Each route began at one of the four biomes: desert, grassland, tropical, and polar; and each station focused on specific GLOBE protocols that could be used as scientific tools to help students to answer their research questions. This event was an enjoyable way to increase the interaction between students and teachers and greatly enhanced the overall learning experience.

After a very successful 2008, Bahrain welcomed the New Year with another training workshop on 26 January 2009. This workshop focused on training primary school educators for the 10 primary schools that have become engaged in GLOBE this year. Forty people attended the event and focused on two GLOBE protocol areas, Atmosphere and Phenology: learning about rain, temperature, clouds, and pH. After the initial introductory and informative presentations from Bahrain's GLOBE coordinators and assistants, the Deputy Chief of Bahrain Civil Aviation Affairs, Mr. Abdul Rahman Mohammed, gave a PowerPoint presentation about climate and weather. A questionnaire was distributed at the end of the workshop, which produced more positive feedback.

Overall, Bahrain has been doing great work in encouraging participation in the GLOBE Program. By ensuring that teachers are well-trained and by inviting scientists in the community to work alongside them, GLOBE Bahrain is able to engage students in cutting edge science while raising awareness of climate-related environmental issues. The GLOBE Program Office looks forward to hearing more exciting news from the Kingdom, and from all GLOBE member countries.
20 March 2009