The sixth meeting of GLOBE Country Coordinators in the Latin American and the Caribbean Consortium (CLAC) took place in Iguazu, Argentina, on 23-24 March 2009, followed by a GLOBE Train the Trainer (TTT) workshop, from 25-27 March. The event brought together teachers from the schools that belong to the Green Corridor, which includes Argentina, Brazil and Paraguay. 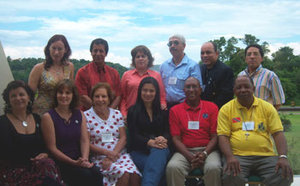 The main objective of this meeting was to provide an opportunity for the Latin American and Caribbean Consortium to further define their Regional Plan. The following actions resulted from the event:

The following agreements were reached during the meeting:

It was agreed by all present that it is important to consult with all countries in the region that were not able to attend the meeting and to request them to join in the working commissions. 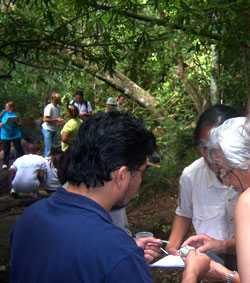 As was mentioned earlier, the CLAC meeting was followed by a GLOBE Train the Trainers Workshop on 25-27 March with the participation of representatives of from Argentina and Paraguay.

The idea of conducting this Train the Trainer workshop in Iguazu was to promote GLOBE research in the Green Corridor of Argentina, Paraguay and Brazil, in order to continue student investigations about Seasons and Biomes; research that was conducted during the International Polar Year between the two Argentina and Alaska.

Therefore, the first task of the workshop was to identify the biome in Iguazu using GLOBE protocols such as those found in the atmosphere, soil, phenology and hydrology investigations and recognize the biome, using the satellite images and knowledge about the Earth as a System.

A special thanks was given to the representatives from the Iguazu Argentina S.A. National Park for their assistance with participants during the workshop through their environmental education program and also for their hard work to guard and preserve the beautiful park.