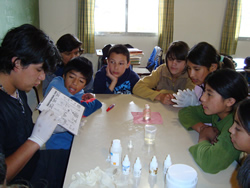 For more than 15 years, GLOBE in Argentina has inspired scientists, students, and teachers by their extended research agendas seeking to gain a better understanding of the environment in order to prepare Argentinean students to face the challenges of the twenty-first century. Led by Professor Maria del Carmen Galloni, who served as a leader in the GLOBE community since 1994 and was the Country Coordinator for Argentina from 1995-2010, teachers worked to develop research that awakens in students the desire to learn more about their local environments based on a practical scientific research methodology that allows them to develop new knowledge at local and global levels. In this sense, GLOBE in Argentina has inspired many stories that help young people find their careers in science, with the possibility of expanding their horizons beyond their home country. GLOBE Teachers Ana Prieto, María Eugenia Bertossi, Paula Martello and Valeria Vera, at San Ignacio High School in Junin school de los Andes in Patagonia, Argentina, shared their stories as GLOBE teachers with hopes of fostering inspiration in Latin America and the Caribbean, and across the world.

Ms. Prieto began integrating GLOBE into her classroom in 2001, which increased student interest in scientific and environmental issues and generated local data through the application of Atmosphere, Hydrology, Phenology, and Soil Protocols. Gradually, other teachers in the school became GLOBE-trained and used data collected in past years to begin developing research conclusions that were presented in the GLE of Croatia (2003) and South Africa (2008), as well as engaging in professional conferences and video conferences with other countries in order to exchange ideas.

GLOBE Teachers in Argentina encourage students to present their research in contests organized by institutions that promote environmental awareness. Constanza del Sol Ferreyra, an outstanding GLOBE student in Argentina, submitted an essay to a competition organized by the United States Embassy, outlining her weather monitoring research in the Chimehuín watershed. Her essay was selected, affording her the opportunity to attend the National Youth Science Camp (NYSC) from 29 June to 23 July 2010, in West Virginia, United States (National Park of Monongahela and Washington). In addition, Constanza worked alongside her classmates on a research project entitled "Influence of Meteorological Variables in the Water Quality of the Upper Basin of the Chimehuín River." 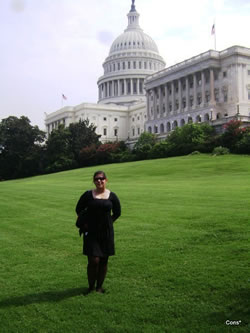 Reflecting on the experience, Constanza stated, "In June of 2010, I was selected from a total of 300 students to travel to the USA and participate in the NYSC. This is an intensive scientific program and includes outdoor activities that were developed 50 years ago in West Virginia. I think that a very important contribution to my selection is the fact that my school has worked with the GLOBE Program for many years. I began work on my project while performing cloud measurements, sustaining active involvement in various other GLOBE activities as my education progressed. In July, I traveled from Argentina to the NYSC with the other selected students. We heard lectures, participated in seminars on various scientific subjects and took part in outdoor activities such as walking, hiking, and campfires. It was an amazing, unimaginable experience that exceeded my expectations in every way. It was fantastic to have the opportunity to be in a different country and learn about very interesting things in the field of science. I especially appreciate the opportunity to connect and establish relationships with kids from other countries with which I am sure to maintain the friendship through the years." 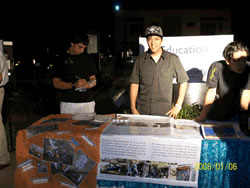 As a result of these and other investigations, the following students had the opportunity to represent Argentina in various world events. Carlos Llaytuqueo won a contest sponsored by the Ashoka Foundation for innovative technologies with a Hydraulic Turbine Project which was presented in the cities of Hyderabad and Mumbai, India, from 10 - 18 February 2010. Carlos also presented his project along with fellow classmate, Lucas Donini, in the "Training to Environmental Entrepreneurship for Youth" event held on 2-3 November 2010, and the "Third Meeting of Young Social Entrepreneurs Ashoka" from 6 November 2010 in Buenos Aires. Another student, Lautaro Porma Favre, attended "The First Regional Meeting TUNZA convened by the United Nations Environment Programme (UNEP) in Latin America and the Caribbean held in Panama from 8 - 9 October 2010, and was elected TUNZA representative of this strategy in order to spread the work among children and youth in Argentina. Lautaro's brother Nazareno Porma Favre traveled to New Delhi, India from 21-29 November 2010 to represent Argentina in the "2010 Kaleidoscope Conference." Nazareno was selected as a Partner in Action and obtained funding for his project, for a period of 3 years, with Oxfam International (youth section), the institution that financed his trip to India. Nazareno's partnership with Oxfam International allows him to engage in the improvement of the science curriculum in two rural schools. With the support of his own school, CEI San Ignacio, Nazareno wants to improve the knowledge of the students concerning water, soil, and weather in order to mitigate climate change effects. His work can be followed through his blog: http://oiyp.oxfam.org.au/members/nazarenop/ 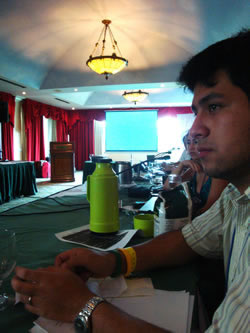 In addition to these achievements, students from San Ignacio School in Junin de los Andes recently submitted a project entitled "Water in the Comahue Region" to a contest of AIC , and are currently awaiting the results.

Congratulations to all students and teachers at San Ignacio School, as well as to all GLOBE Teachers who achieve this level of motivation in their students, and to the students who engage in these projects and experiences.

Read this newspaper article about the recognition of two San Ignacio students.