Peru has been a part of the GLOBE Program since 1997, originally implemented by the Environmental National Council (CONAM). The Environmental Ministry (MINAM) was created in May 2008 and currently oversees the coordination of GLOBE, promoting environmental education and civil participation through the collection of important data researching the effects of climate change, the state of hydraulic resources, and the value of biodiversity in Peru. MINAM, working in collaboration with t he Education Ministry (MINEDU), has ensured that GLOBE continues to grow strong in Peru.

Throughout 2012, MINEDU coordinated a series of training workshops in eight different schools in Peru. Workshops were held in Ancash, Arequipa, Cuzco, Ica, Junin, Lima, Piura, and San Martin to increase public knowledge and expand the capacity of GLOBE teachers in Peru. A total of 353 teachers and environmental advocates were trained and GLOBE instrument shelters were installed at each of the eight locations. These tools will serve to increase environmental consciousness and involvement among students and teachers; it is also their hope that it will inspire other schools to become interested in implementing GLOBE.

The first workshop, held in two parts, took place in Ventanilla on 2 June and 9 June 2012. A total of 40 participants included 32 teachers representing 16 schools, four specialists from MINAM, two Peace Corps Volunteers, one university student, and one specialist from the local education management unit (UGEL). The workshop was held at School I.E. Nº 5086 (Politécnico de Ventanilla). Investigation themes included the observation of temperature and humidity variability through a three month duration and from there to obtain inferences concerning the investigations. Students will continue to take temperature and humidity measurements in the morning and afternoon five days a week for the next three months. 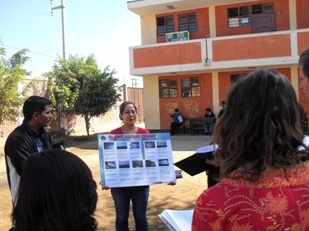 Another workshop was held in Ica: Los Aquijes on 15-16 June with 40 participants which included 30 teachers representing five schools, one specialist from MINAM, five Peace Corps Volunteers, one volunteer from the Red Cross, one specialist from the Regional Office of Education (DRE), and two representatives from local NGO's. The workshop was held at School I.E. Nº 22511 (El Rosario). Participants looked at the evolution of temperature and humidity throughout the year at designated land cover sites and how this affects the production of their garden. Students will continue these observations three times a day, five days a week. 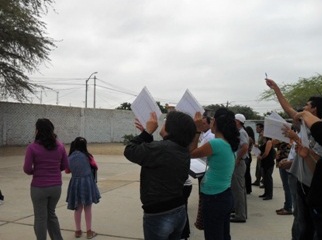 Attending the Piura workshop, held 22-23 June, were a total of 46 participants including 39 teachers representing a total of 20 schools, two Peace Corps Volunteers, one Peace Corps Regional Coordinator, two specialists from the Regional Government of Piura, one specialist from the Regional Office of Education (DRE), and one representative from the local press. The workshop was held at School I.E. Nº 15467 (Micaela Bastidas). Investigations allowed participants to register the change in land cover in relation to the meteorological conditions of the zone. Students at the school will continue to register the maximum temperature each day and chart the variations that exist. 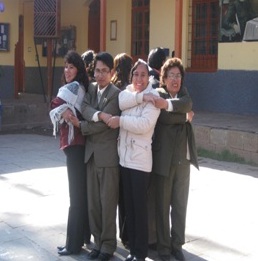 Cusco has embarked on various projects, including:

1.) A project researching how the daily temperature is linked to the number of cases of the flu reported in classrooms, measuring the relationship between climate and respiratory illnesses;

2.) A project that investigates the correlation between weather predictions and traditional knowledge concerning climate change with the data obtained using the meteorological station;

3.) A project that examines the type of food produced in an area with similar climatic conditions of another area, and whether or not it is possible to work with a sister school in this investigation of food and environment to compare the results. 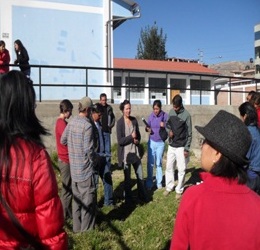 A total of 42 people attended a workshop held on 13-14 July in Ancash: Huaraz. Participants included 27 teachers representing a total of seven schools, three specialists from The National Park of Huascarán of SERNAP, two Peace Corps Volunteers, four university students, two from the national environmental volunteers network, one MINAM specialist, one Peace Corps partner, and two representatives from an international NGO. The workshop was held at School I.E. Colegio de la Libertad. Students will continue to observe temperature variability through December. They will continue with this investigation throughout 2013 and create more projects related to phenology studies, soil, cloud cover, and land cover investigations. 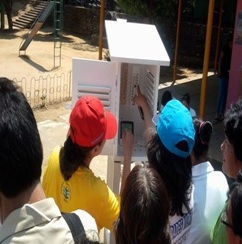 On 10-11 August a workshop was held in San Martin: Tarapoto. The workshop hosted 44 participants including 39 teachers representing a total of 15 schools, one specialist of the Natural Protected Area of the Forest of Alto Mayo, one specialist from the local education management office of San Martín (UGEL), two specialists of the Provincial Municipality of San Martín, and one local NGO. The workshop was held at School I.E. Tarapoto.

The city of Tarapoto is interested in investigations that link the plant life cycle with meteorological variables in phenology. They are planning an investigation that measures temperature, precipitation, and density to see how climate influences the lives of the insects encountered on the school's trees. 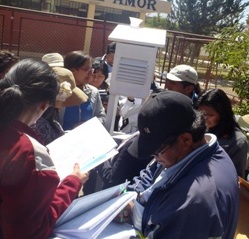 In the workshop completed in Arequipa on 17-18 August there was a total of 44 participants including 32 teachers who represent nine schools, one specialist of the Regional Government of Arequipa, nine specialists from the local education management office of Arequipa (UGEL), one Peace Corps Volunteer, and one specialist from SERNAP. The workshop was held at G.U.E. Mariano Melgar Valdivieso School. The city of Arequipa has also committed to the development of an environmental campaign that will focus on an investigation of light contamination. 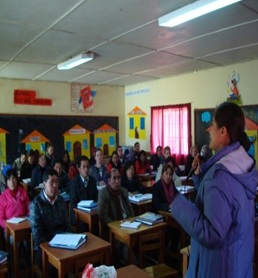 The city of Junín has shown interest in developing a project that examines the relationship between types of food like maca with the climatic conditions of the area. Additionally, they are interested in performing an investigation about temperature and humidity variability.

In addition, translation efforts are currently focusing on ensuring selected GLOBE materials are available in the Quechua language, primarily spoken in the Andes.  See the GLOBE Cloud chart in Quechua.

The GLOBE Program Office would like to commend the active participation and rapid expansion of GLOBE in Peru. With a total of 200 newly trained teachers, students in Peru will have the opportunity to take a hands-on approach to their education and share data with fellow students in Peru and around the world!

The Next Generation of GLOBE Climate Scientists in Peru

University Students Use GLOBE Data to Carry Out Climate Research