The National Science Teachers Association (NSTA) has been bringing science teachers together at their annual conferences for more than 50 years. Open to member and nonmember science educators, NSTA conferences offer the latest in science content, teaching strategy, and research to enhance and expand professional growth for teachers of science. This year, the conference took place in New Orleans, Louisiana, and was attended by approximately 10,000 science teachers. The majority of participants come from the United States, with 5% coming from other countries, primarily Canada, but that number is steadily increasing as NSTA is hosting more programs geared toward international participants. 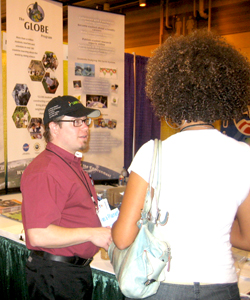 NSTA conferences are packed with innovative presentations and hands-on workshops as well as special invited speakers, educational field trips, short courses, NSTA Symposia (which provide online follow-up after the conference online), and social networking events. The Exhibition of Science Education Materials is the largest exhibition of its kind and is an invaluable source of curriculum and other products.

Throughout the busy conference, there were 22 GLOBE presentations.

The morning session included a GIAC update by North America GIAC representatives Paul Ruscher (Florida) and Alternate Representative Marsha Willis (Texas). This update was followed by a presentation on the status of the GLOBE Program in Canada and on the upcoming 13th GLOBE Annual Meeting and Professional Development Workshop in Calgary, Canada by Canada's GLOBE Country Coordinator Bill Batycky and his wife Carol. The North America GLOBE Alumni Organization representative Matt Fenzel, and the GLOBE Parent Council representative and head, Keith Young, made their presentations via Skype. Efforts of several of the GLOBE Partnerships were highlighted through a poster session.

The focus of the afternoon session was state standards alignment of GLOBE. The session was led by Kathryn Ginger, Instructional Designer with Digital Library for Earth System Education (DLESE). Initial work has been completed to align GLOBE to the National Standards and participants began utilizing the tools provided by NSDL to align GLOBE activities to their individual state standards. Jerry Cobbs, U.S. Partner representative with AMSTI-GLOBE in Montgomery, Alabama, joined the meeting via Skype to report that Alabama had completed their state standards alignment utilizing the NSDL tool.

On Wednesday, 18 March, GLOBE ESSPs Project Lead, Gary Randolph, along with and David Smith, presented a NSTA Short Course. Teachers attending this course learned the basics about the GLOBE Program and then spent the morning investigating soils through the Just Passing Through learning activity and exploring connections in the new Earth System Poster.

All Participants attending Wednesday morning and afternoon sessions completed a survey to help guide GPO planning for the upcoming Student Research Campaign on Climate 2011-2013. During the last 2 hours of the meeting, North America Partners participated in an open and valuable discussion on ideas for generating funding to conduct GLOBE activities in their target areas of the Campaign. Training models that include ESSP trainings were discussed and information on international collaborations by U.S. Partners was shared. 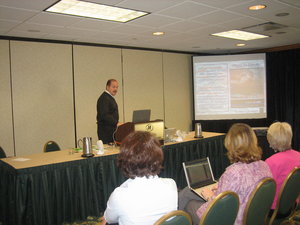 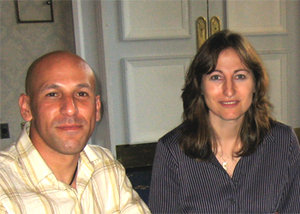 In keeping up with the annual tradition, GLOBE hosted a reception to honor GLOBE teachers, Partners, Trainers, PI's and other community members involved with GLOBE activities. This year, many teachers who have participated in GLOBE at Night campaign also attended the event. GLOBE teachers from as far away as Ohio and New York had an opportunity to meet and network with teachers from Texas, West Virginia, Louisiana, Mississippi, and Florida. Partners from U.S. and Country Coordinators from Canada as well as Thailand had an opportunity to meet and share training models and ideas. Vendors who provide GLOBE certified equipment also attended this event and GLOBE teachers, along with Partners, were able to network with them and share their ideas and needs for affordable and quality equipment in their classrooms. All attendees of this reception participated in the survey regarding the GLOBE Student Research Campaign on Climate which will begin in 2011. Participants of this survey provided their input on relevance to their curriculum and interest to their students on a variety of topics pertaining to the Student Research Campaign. Those who participated in the survey also had an opportunity to join in the giveaways of fabulous door prizes which included GLOBE vests, hats, t-shirts and polo shirts. 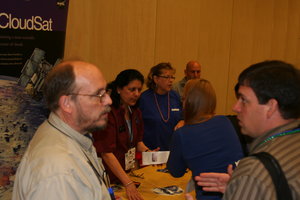 GLOBE and the CloudSat Education Network (CEN) teamed up to participate in the Oceans and Atmosphere Share-a-thon and the Space Science Share-a-thon. Both these Share-a-thons were well attended by teachers, many of whom had been GLOBE trained in the past and were reconnecting with GLOBE as their schools in the areas most hit by the intense hurricane seasons in the past, were now rebuilding and reviving their science programs. GLOBE Partner at Florida State University and GIAC Representative Paul Ruscher, along with Catherine Williamson of Sci-Port, Louisiana's Science Center, assisted in the Share-a-Thon and were available to visit with prospective teachers from Louisiana, Florida and neighboring states interested in joining GLOBE. 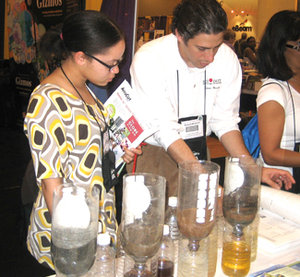 The GLOBE Program staff and U.S. Partners serving as volunteers at the GLOBE Booth visited with over 1,000 teachers and educators. US partners from Arkansas, Kansas, Louisiana, Michigan, Missouri, and West Virginia took turns to assist GPO staff in volunteering at the booth, distributing GLOBE materials, sharing ideas on implementing GLOBE activities in the classroom, demonstrating a sample activity ‘Just Passing Through', and networking with educators. Many of the visitors at the GLOBE booth were also able to attend GLOBE presentations throughout the conference for more in-depth understanding of GLOBE and its implementation across the curriculum. Teachers who have attended GLOBE trainings in the past and those who were introduced to GLOBE for the first time, equally loved the Elementary GLOBE materials and information on GLOBE at Night. Those who have participated in the past GLOBE at Night campaigns sought out the GLOBE booth to learn more about how they could become involved in the GLOBE program. A GLOBE teacher who now teaches at an American school in New Delhi, India, visited the GLOBE booth multiple times and was thrilled that he could continue his involvement through working with the GLOBE Country Coordinator in India.