GLOBE Partnership in California Shoots for the Stars in Education 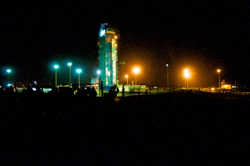 The early morning air roared like thunder as a ULA Delta-II rocket soared into the skies over Vandenberg Air Force Base in Santa Maria, California. At 5:48 a.m. on 28 October 2011, NASA launched the National Polar-Orbiting Operational Environmental Satellite System Preparatory Project (NPP) into orbit over Earth. This satellite has five instruments on board that will help meteorologists improve weather forecasts and advance Earth and climate science. NPP will pave the way for the next generation of satellites, called the Joint Polar Satellite System (JPSS), by evaluating instrument performance during its five-year mission life. The Endeavour Institute is a non-profit organization sponsored by NASA, GLOBE, and other contributing programs. The institute uses hands-on teaching and project-based simulations to educate program participants in conjunction with GLOBE protocols. 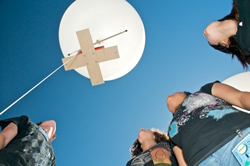 The importance of the NPP created a prime opportunity for the Endeavour Institute, a GLOBE U.S. Partner since 2005, to educate the public about the launch prior to the event. Endeavour hosted an NPP Educator Launch Conference from 24-25 October 2011 at Vandenberg Air Force Base, the 2006 launch site of CALIPSO and CloudSat. The program included a tour of the NASA Mission Director Center, close-up viewing of the powerful Delta-II launch vehicle on the launch pad before and during launch, and hands-on practical educator workshops and presentations by NASA and NOAA Principal Investigators and other practitioners. Participants also took part in several workshops and activities that increased their knowledge of GLOBE investigation areas and protocols. Some of the workshop activities included learning about how the satellites measure the atmosphere, meteorite analysis, and the communication network in deep space. Ten K-12 teachers became GLOBE certified at this event by participating in a workshop led by Dr. Paul Ruscher, a former GLOBE Partner and Professor of Meteorology at Florida State University. As the NPP launched into space, over 100 Endeavour program participants watched the Delta-II rocket leave the atmosphere.

"We have sponsored fourteen NASA and NOAA K-16 Educator Launch Conferences since 1994," said Edmund Burke, a founder of the Endeavour Institute and the Endeavour Center, NASA Educator Resource Center (ERC). "Our passion and mission is to educate and inspire youth and support K-12 teachers about Space and STEM education." Steve Kliewer, Director of the Endeavour Institute, is a firm advocate for STEM education through the application of GLOBE. He believes that teaching students to think for themselves and to seek out information is more beneficial to their education than forcing students to memorize facts that may not apply to their futures. 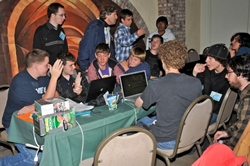