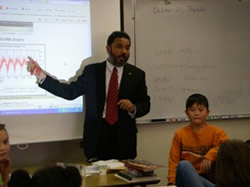 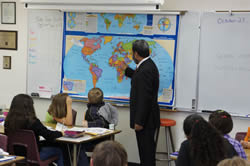 James Monroe Principal Mr. Gerard Holzman showed Mr. Jambi and his accompanying student photographer Badr Al Zahrani to Mrs. Peterson's classroom. The group spent the morning learning about geography, Earth Science, and how the GLOBE Program is implemented in both the United States and Saudi Arabia. Students took full advantage of Mr. Jambi's visit as they were interested in learning what other students of their same age are studying in countries halfway across the world. In exchange, the students proudly shared details about the school's Salmon Cam and Salmon and Plants for Kids project, an ongoing habitat project designed to educate students about the importance of keeping a clean environment for the survival of their native salmon. 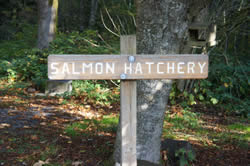 Each fall when school starts Mrs. Peterson's class begins learning GLOBE protocols for daily atmospheric observations and data reporting. Students also perform investigations to determine how water quality affects local streams, rivers and the Puget Sound estuary as a habitat for aquatic animals. They then apply this knowledge to the salmon life cycle and their dependence upon good water quality for survival. Following the establishment of their classroom hatchery, students monitor water quality daily and track weather events to learn how climate can impact habitat for spawning and development of young salmon. Mrs. Peterson stated, "Building understanding of how weather and climate relate to our Puget Sound ecosystem begins with our GLOBE activities and investigations."

Every year students at James Monroe raise as many as 400 Coho Salmon to be released into their local watershed when ready to survive on their own. Mr. Jambi was delighted to explain that he was familiar with the amazing life cycles of Pacific Salmon and reminisced over his undergraduate experience at Oregon State University where his knowledge of salmon was developed. 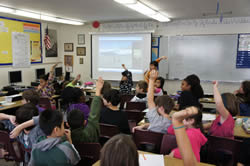 In return, Mr. Jambi challenged the students with their understanding of Earth system science. The James Monroe Students were also impressed at the research Saudi Arabian students implement around the idea of temperature changes during eclipse events. He educated them on the usefulness of solar energy during water shortages and in contrast, the catastrophic floods arid countries experience when suddenly experiencing excessive rainfall. Citizens of Jeddah can recall such an event in November of 2009 when the port city experienced six hours of rain that turned into a devastating flood claiming 124 lives, causing city-wide blackouts, and destroying thousands of homes. Mr. Jambi, his colleagues, and his students used this devastation as a learning opportunity to use GLOBE precipitation protocols and compare results in several GLOBE schools affected by the floods. In the wake of these events Mr. Jambi stated, "In six years of GLOBE observation in Jeddah, measurements have never been this high." 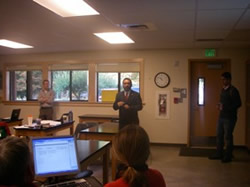 Mrs. Peterson also led Mr. Jambi on a tour of the Lively Environmental Center, which is a preserved natural site maintained by Everett public schools for the students' environmental education. It was named after Mr. John W. Lively, who donated the land in 1980 for the school district's use. Since then, it has become a place where schools can walk wooded trails, visit garden plots designated for each elementary school, visit salmon streams, museums, picnic tables, and classrooms. Mr. Jambi visited briefly with 9th-grade science teachers who were working on mapping and planning for new Earth science curriculum units. Mr. Jambi shared his GLOBE projects and work, and listened to the teachers' plans for integrating GLOBE curriculum. At the end of the day Mrs. Peterson, Mr. Jambi, and the student photographer enjoyed the beautiful weather by taking a walk to observe the in-stream salmon hatchery. 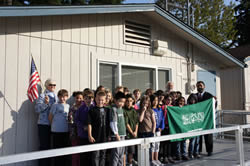 Mr. Jambi's visit to James Monroe Elementary greatly impacted Mrs. Peterson's 4th-grade class. She noted that "students still refer to parts of their conversations with Mr. Jambi when explaining energy use and the importance of water conservation."

According to Mrs. Peterson, when the students receive news reports of drought in the southwestern United States it takes on a new meaning for them, as they have all taken the availability of clean water for granted at times. Mrs. Peterson's students now have a newer and more applicable outlook when studying Earth system science. They are becoming more interested in the possibilities of abundant renewable energy produced by harnessing solar and wind power, and their daily collection of GLOBE atmospheric data has taken on a greater sense of urgency as the class realizes that other students or scientists may use their data for study and comparison. The students hope to continue the exchange of educational and cultural information between the two countries in the future.

The Kingdom of Saudi Arabia joined the GLOBE Program on September 30, 2002, when the United States Department of State signed the bilateral Agreement with Saudi Arabia's Ministry of Education. The Near Eastern country is GLOBE's 99th official country.