Quaking Aspens: The Coolest Tree (In My Biased Opinion)

Is My ADD a Metaphor for the Scientific Process? 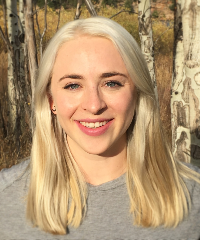