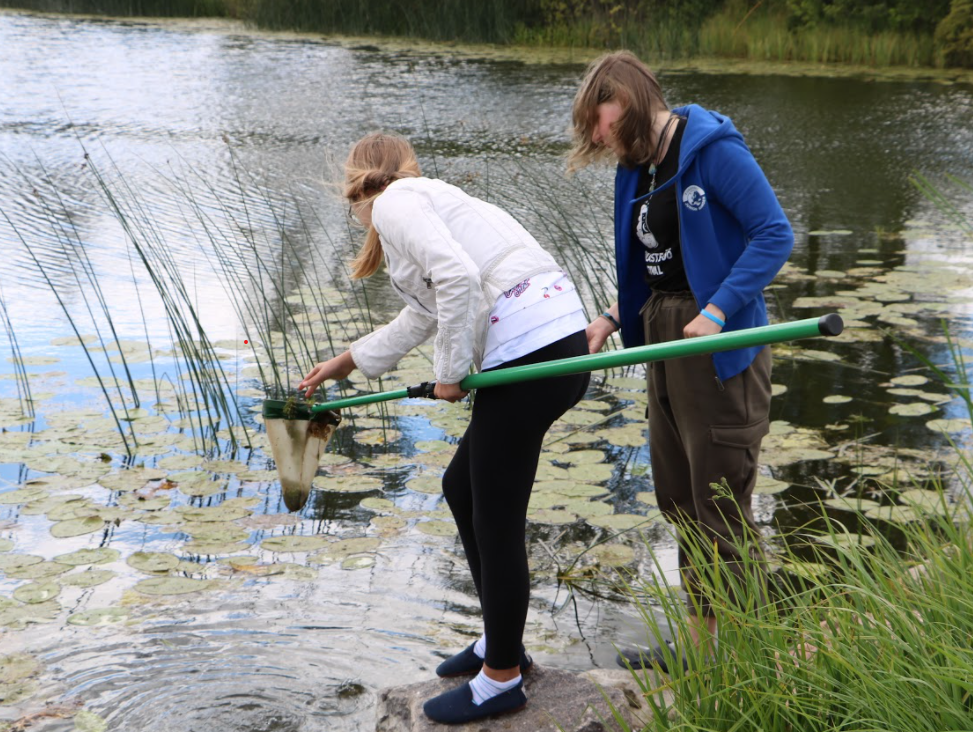 The expedition began on 10 August with an opening ceremony and the hoisting of The GLOBE Program flag. In the afternoon, participants were divided into three groups (who experienced three concurrent sessions). The first session was a boat trip on Lake Viljandi (on a boat named Rannapiiga) to help participants get to know the study area. The second session was a virtual presentation by Brian Campbell, NASA Senior Earth Science Education Specialist for the Trees Around the GLOBE Student Research Campaign. The presentation focused on satellites that measure trees from space. Campbell also showed participants how to measure tree heights. The third session was a group meeting to discuss preferred learning sessions and expedition topics. On Monday evening, it was announced that the seven teams should prepare a “role-play” event for Wednesday.

The second day consisted of learning sessions, which focused on hydrology, soils, bogs, water and plants, and aquatic life/land cover and energy in different Earth’s spheres.

During the event, all teams attended special sessions, where they learned how to create a study site on the GLOBE website, and how to report data by using the Data Entry App. All data collected during the expedition was sent to the GLOBE database. In addition, participants tested both the GLOBE website and Data Entry app – and gave feedback on their “user experience” based on different devices, operating systems (iOS, Android), and versions.

After dinner on the second day, a group photo was made where every team, and their teachers, created a symbol form the word “GLOBE 25.” In the evening, every team got to know what their “day theme” would be for their expedition and, with the help of supervisors, the expedition plan was set.

On Wednesday, teams set off on the expeditions. During the day, teams made observations, took measurements, and collected data for their research. Afterward, data collection results were analysed and presentations were prepared. Based on the research, the teams formed presentations in English that reflected the research question, the hypotheses, what and when things were done, results, and conclusions. In addition, the teams had to write up reports in which all the data – as well as what and when everything was done – had to be mentioned and described. In the evening, the teams performed their role-plays about how GLOBE students beat COVID-19; their efforts then received feedback from the jury/board.

The last day started with a quiz, where the participants had to, for example, know the main cloud types and events from GLOBE history. After the quiz, the teams gave presentations about their expeditions one by one and the commission gave feedback and recommendations on how to improve the reports so that they could be submitted to the 2021 GLOBE International Virtual Science Symposium (IVSS) (while GLOBE games were being held for other teams).

During one of the GLOBE games, teams had to find something to make the most alkaline solution possible. In another game, teams had to measure the height of the flagpole with given instruments. In yet another game, teams played the game “Alias,” where all the GLOBE-related words were explained. In the last game, teams had to find the highest (light bulbs) and lowest (the sky) temperature they could find. During the closing ceremony, all participants and organizers were recognized for their participation in the GLOBE Learning Expedition. The learning-expedition ended with the traditional cake-eating event.

The event was successful and COVID-free. Most of the events were held outdoors in order to reduce risks, and disinfectants and masks were provided to all participants.

“We managed to host our annual event, and we produced seven research reports to submit to the IVSS during the four days of the event,” Estonia Country Coordinator Laura Altin said. “We proved to ourselves, and others, that it is possible to have a safe event when people take responsibility and are motivated to come together to celebrate GLOBE’s birthday. Our event model is working, and could be used as a model for other countries.”

This Star Story was contributed by Hanna Tali (a student from Kilingi-Nõmme Gymnasium) and Estonia Country Coordinator Laura Altin.