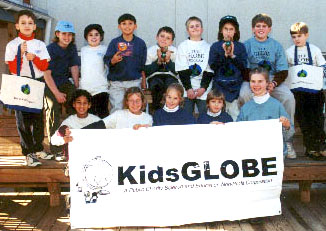 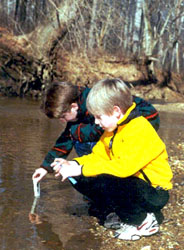 GLOBE students at the Norwood School in Bethesda, Maryland, are sharing more than data. These hard-working students are also sharing the proceeds from a school fundraiser to help the Tsitsiboga Public School in Carltonville, South Africa, acquire an instrument set for conducting their GLOBE protocols.

The students at Norwood hope to set up a partnership between the two schools to share and compare their GLOBE data, as well as to learn about each other's cultures. "We picked South Africa because it has a different climate, which would give us interesting comparisons," said GLOBE Teacher Kay Berglund.

Ms. Berglund and her students raised money by selling KidsGLOBE merchandise like bean bag animals sporting GLOBE T-shirts. KidsGLOBE is a non-profit organization that works to develop products and projects that can raise money to enable schools all over the world to join the GLOBE Program.

"Buying cool stuff from GLOBE is a fun way to help kids in other countries without GLOBE," said Beth, a fourth-grade Norwood student. Many of her classmates agree.

"I learned a lot from GLOBE. I was also happy we were helping people by doing GLOBE," said Jed. "I am the kind of person that likes to help others, so that's why I like GLOBE," added fourth-grader Nebai.

The students also realize that their participation in GLOBE helps not only their fellow students in South Africa, but scientists and the environment as well. "GLOBE taught me a lot about the environment," said Genevieve. "Now I know how the animals feel when their homes are extinct. It's like a big cage capturing their habitat."

In an effort to continue its mission of helping GLOBE schools in developing countries, KidsGLOBE recently unveiled "GLOBE Twinning," a school adoption program to help schools obtain GLOBE equipment. The Norwood School seized the opportunity, and became the first U.S. school to participate. For more information on KidsGLOBE, visit www.kidsglobe.com.

"GLOBE is fun for me," summed up Jordan. "I love the feeling of knowing that I helped someone that needed it."