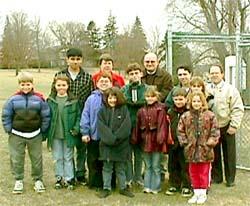 Cooperation among GLOBE schools is flourishing both globally and, in some cases, locally! In West Chester, Pennsylvania, GLOBE students of different grade levels and even different schools have found that working together is a very effective way to carry out protocols and learn scientific concepts.

The East High School students travel to Hillsdale after school to work as GLOBE trainers, teaching the younger kids how to do GLOBE protocols in atmosphere, cloud types, and precipitation. The older students also help ensure the measurements are accurately taken and the data properly entered.

Ed Morales, one of the high schoolers who works with younger kids after school, said the experience has been good for all the students, younger and older. "The GLOBE Program has helped the kids identify different cloud formations and track other GLOBE school data from around the world," Morales said. "GLOBE doesn't necessarily make future meteorologists... however, it could make a child think about studying the atmosphere as a hobby or even as a profession."

East High student Douglas Dyke pointed out that cooperative efforts don't stop at home. The students are sharing and comparing their data with GLOBE students around the country and around the world, including GLOBE schools in Australia, Egypt, Germany and Switzerland. His classmate Jennie DiMucci added that she not only has fun working with the younger students, but she learns nearly as much as they do.

Mr. Vosburgh says there's no doubt that working with the high school students from Mr. Dyke's classroom helps his fifth-graders with hands-on learning. "It's the kids teaching kids. It's almost like a peer working with them. The younger kids tend to listen more closely when it isn't a higher authority telling them what to do, and that helps with their understanding," Mr. Vosburgh said.

Ms. Ziegler also believes that having students of different grades work together is an effective way to promote learning. "The kids are very excited about GLOBE. There is such high interest that many of the third-graders and their parents are willing to take data over the weekend and during the summer," Ziegler said. "I've already had parents stop to tell me their child is very excited about GLOBE."