Neither snow nor rain nor heat nor gloom of night stays these GLOBE students from the swift completion of their appointed rounds. Originally said about Persian message couriers in 500 B.C. and made famous by the U.S. postal service, that paraphrase suits the GLOBE students of Reynolds Junior/Senior High School in Greenville, PA.

They are in the midst of their fifth year of collecting and reporting data regardless of the weather, holidays, or even school dances. They have reported GLOBE data nearly non stop including during summers, Thanksgiving vacation and even on Prom days since they became one of the first GLOBE schools in October, 1995. 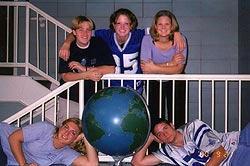 That dedication has benefitted not just scientists and other GLOBE students who need consistent data for their research, but also has sparked in the students serious thoughts about their futures. Their GLOBE Program activities include environmental science, serving as mentors to younger students and working closely with GLOBE scientists and educators.

"GLOBE has really made me think hard about my life. Before, I thought that I would go to college and major in something uninteresting but easy," said Jeff, a senior who was responsible for summer hydrology readings at Kidd's Mill Covered Bridge, Reynolds' study site on the Shenango River. "Now, I have leaned toward taking in the field of science, which is challenging but fun."

GLOBE scientists and educators have turned to Reynolds for their excellent measurement and data reporting skills. NASA/GLOBE soil scientist Elissa Levine, PhD, is using Reynolds data in her work, the group is helping GLOBE test max/min thermometers, and the school is participating in an evaluation of the GLOBE program.

GLOBE teacher Colleen Kelly began a program where high school students work with elementary school kids on hydrology and soil protocols. Tenth, eleventh and twelfth-graders design lesson plans, build lab materials, and present lessons in "Water Detectives, Soil Moisture," "Soil Percolation," and "Clouds." Ms. Kelly said her students have been very creative teachers. Many have remarked that working with the kindergarten through third-graders is a highlight of their careers.

"Being in this program has helped me learn more about the environment and teaching," said Kurt, a student of Ms. Kelly's. "It is an experience I'll never forget."

Reynolds has a long-standing history with GLOBE. One of the first schools to sign up when GLOBE teacher Ron Ruhlman got his training in 1995, Reynolds has garnered prizes such as first place in a GLOBE poster contest in 1997 and a trip to Helsinki in 1998. Mr. Ruhlman, who is now retired but still returns to the school to work with GLOBE students, began a tradition of working closely on student research projects with other GLOBE schools from around the country and around the world.

"We're just here in a little corner of Pennsylvania," Ms. Kelly said. "GLOBE expands our world, and is a great program for kids from all grades and achievement levels."