It might not be surprising to find scientists studying the wetlands and pine and hardwood forests near the South River and Sugar Creek in Georgia. You can picture them, in their hip-waders, talking via walkie-talkie, carefully taking down their measurements on waterproof data sheets. Later, in front of their computers, they'll make graphs from their data, compare each other's information, and look for long-term trends. 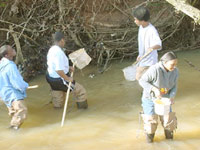 The scientists you'll see monitoring the river, streams, air and soils on the 60 acre-campus of Cedar Grove Middle School in DeKalb County, however, are probably younger than most researchers. They're the 6th, 7th and 8th graders in the school's elective "GLOBE Environmental" course.

"There's no 'next chapter' because we have no book," said GLOBE teacher Eric Mau. "We do the protocols then get into the computer rooms to look at our data and send emails. There are no tests, no homework. This is more inquiry, more scientific."

Mau has won grants that allowed him to buy good equipment, which he keeps in backpacks that teams of eight students use nearly every day on the school's site. Later this year, they will also use their Global Positioning System (GPS) units and take water samples on a rafting trip along the Chattahoochie River. 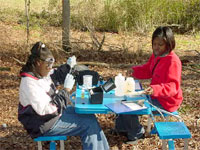 He has the students investigate the effects of substances and activities such as fertilizer, construction, erosion and pollution on water, soil and air. "When we looked at fertilizer, they said it would affect the water's pH but it affected the conductivity. They're making predictions and learning when they make mistakes," Mau said. "We break it down, too, by doing experiments with fertilizers, water with salt, and making batteries. I just tie it all together and try to work in chemistry and biology."

Mau said he believes his students are gaining a positive attitude toward science that will serve them well in their later school years and even their careers. "They go out like professional lab technicians. I'm hearing things like 'being a scientist is pretty cool.'"

Cedar Grove's GLOBE students have won prizes from the state's Youth Environmental Symposium, where most of their competition came from high school students. Mau and the school have also been awarded several cash grants, which they've used to fund the elective class, buy scientific equipment and keep up the grounds through tree-planting, environmental clean-up and other projects.

Students don't usually find electives until they reach high school. But Cedar Grove is an unusual school on an unusual campus. Principal Deborah Rives has deemed the school "environmentally themed." Mau is an enthusiastic and diligent teacher who could combine the fun of an "outdoor classroom" and the sophisticated learning of a GLOBE-based curriculum, she said..

Before becoming principal of the new school, Rives had been science coordinator for DeKalb County's middle schools. When the large, environmentally diverse site was chosen for a new middle school, the University of Georgia extension that is also on campus approached Rives with the idea to take advantage of the site's rich ecology.

Neither Rives nor the university knew she would be tapped to be the school's principal.

"We have lots of different biomes here, different kinds of habitats," Rives said. "It's a great site: we're at the end of a dead-end road, the Environmental Protection Agency has an air-quality station nearby, and there is a wild-bird refuge. This was an opportunity to teach an environmental science class, and the state allowed us to begin one as an elective."

Rives noted that the school has great support from parents and the surrounding community. "I think the community really sees this as important environmentally and educationally," she said.

"These students are out there making the connections between science and technology and the real world," Rives said, "and it's important to them because it's their own community."