GLOBE teacher Richard Muncy wanted to borrow a camera from Pigeon Roost Elementary resource department to snap photos of his 5th-grade GLOBE students at work. The school, impressed, called in local Kentucky newspapers to take the photographs instead. 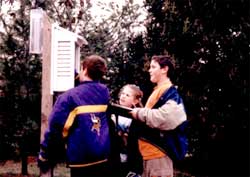 Stories in the Martin County Sun and the local Citizen Editorcaptured the dedication, teamwork and enthusiasm on the part of Muncy's fifth graders as they complete regular protocols and conduct GLOBE activities. His students monitor cloud cover and type, precipitation, and soil temperature. They have done other soil testing and have used the clinometer to assess the heights of trees and the horizon.

"Want to know the weather at Pigeon Roost? If you live in Martin County or any part of eastern Kentucky, a quick glance outside should give you an answer quickly," wrote Citizen Editor reporter Gary Bakk. "But what if you live in Florida, California, or halfway around the world? Thanks to the efforts of Pigeon Roost Elementary fifth-graders, weather data is collected daily...and...the results posted on the GLOBE web site," read the newspaper story.

Pigeon Roost is a small school in rural eastern Kentucky with acres of land and a creek on site. Muncy plans to have his students begin testing the water, which was recently contaminated by sludge.

Participation in the GLOBE Program has sparked interest in the community and has elevated the importance of hands-on science in the fifth-grade curriculum at Pigeon Roost. A GLOBE display in the school's hallway garners a lot of attention from students, teachers and parents. The school conducts month-long "extended school services," where students from all grades participate in learning activities that concentrate on one subject. Muncy used GLOBE activities, even for the first-graders, when the topic was science. 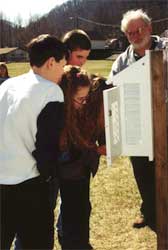 "Parents of kids in the third and fourth grades have asked me about GLOBE because they want to be sure their children get to participate when they're in my class," Muncy said.

Muncy's students were on television, too, after reporters from a local station read the newspaper articles. He believes his students' enthusiasm for their scientific work, the importance of their results to scientists, and the international participation is what attracted the press.

"Just seeing kids doing science instead of looking at a textbook is exciting," Muncy said. "They are motivated and have a real interest in science. Each day when it gets time to go out they let me know, no matter what else we're doing.

"They also realize that they're sending in data that scientists are really using, that they're part of a team," the teacher continued. "Each week, I look up what new schools have joined GLOBE. My students see that schools from all over the world, from Europe, Africa and everywhere, are joining their team."