A group of GLOBE teachers, school principals and Country Coordinators from seven nations gathered recently in Fairbanks, Alaska to learn GLOBE protocols and to advance an international scientific investigation into whether and how much harmful chemicals from lower latitudes have seeped into the Arctic region. 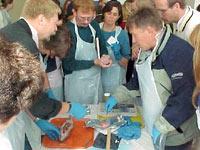 Participants learned an unusual protocol -- doing biopsies of fish -- for helping to determine levels of persistent organic pollutants (POPs). The protocol is to be used this fall in two or three schools in each of seven nations whose borders include part of the Arctic.

The meeting was supported and hosted by GLOBE Partner University of Alaska- Fairbanks, and its Center for Global Change and School of Agriculture and Land Resources Management School. The 45 participants are from Alaska, Canada, Finland, Iceland, Norway, Russia and Sweden.

Developed by scientists at the Norwegian Institute of Atmospheric Research (NILU), the POPS protocol entails students securing local fish, then removing liver and fat samples for analysis of POPs levels by NILU scientists. Their measurements will give the environmental research community a useful data set covering new POP levels in the Arctic.

POPs come from industrial sources, which by and large do not exist in the Arctic, therefore scientists theorize that POPS are introduced to the region by air through strong south to north airflows and by water via the significant numbers of Arctic rivers. The pollutants gather in fat tissue, muscle and the liver, the body's filter of pollutants. 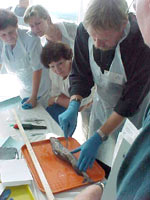 "The reason this is important is because the Arctic has long been considered pristine. There are large numbers of people living on subsistence and there's concern about POPs entering the food chain, through the mammals and fish the people live on," said Elena Sparrow, GLOBE Phenology Co-PI, UAF GLOBE Partnership Coordinator, and steering committee member of UAF's Center for Global Change and Arctic System Research.

"The objectives of the protocol are to raise awareness about the long range transport of persistent organic pollutants like PCB's and to investigate the presence of brominated flame retardants in the Arctic," said Canadian Country Coordinators Catherine McEwen, who attended what she described as "a most exciting workshop."

Karl Torstein, Norway's GLOBE Coordinator, was responsible for changing the GLOBE Arctic Initiative from an idea into a reality. "We look forward to working on project implementation this year and seeing each other again next year at a GLOBE Arctic Workshop in Iceland. There we will learn the advanced GLOBE measurements, the new POPs protocols and discuss our joint research, " he said.

Students will collect local fish and cut fillet, muscle or liver samples. Then, NILU will analyze the samples for polychlorinated biphenyls (PCB's) and polybrominated diphenyl ethers (PBDEs). The findings will be posted on the Internet. Schools then will evaluate the data and write a report about their sampling process. They also will compare their results to other schools' finding and scientific literature. Results will be published in international scientific journals.

"I am very impressed with the precision of the GLOBE protocols. I think that GLOBE teachers and students will provide NILU with valuable samples to help the international scientific community better understand POPs in the Arctic," said NILU scientist Eldbjorg Sofie Heimstad. "With the aid of student research and collaboration based on NILU's analysis and the student feedback about how these results tie into weather patterns and other natural systems that are measured in GLOBE, we will truly have a lot to talk about."

Sparrow added: "I see much hope for the world because this project involves children of all ages, compliments our initiative to combine western scientific knowledge using GLOBE with native knowledge and shows that our similarities tie us together."

"Although this is not a GLOBE protocol, by participating in the POPs sampling GLOBE students can make an important contribution to the scientific understanding of a part of the environment that affects them," said Dixon Buter, GLOBE Chief Scientist.

Learn more about the Arctic POPs Initiative at: http://www.newpops.org/apop/index.html and at http://www.nilu.no/niluweb/services/arcticpops/.