GLOBE Students in Saudi Arabia view the Transit of Venus 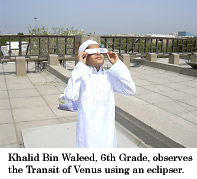 Collecting Earth science data is only part of what GLOBE teacher Rafat Jambi and his students do together at Hamzah High School, in Jeddah, Saudi Arabia. On June 8th, 2004 they observed the transit of Venus. It began at 5:22 UT (or 8:22 AM. local time). "By using the eclipser provided by King Abdul Aziz City for Science and Technology it was very clear to see it as a dot passing through the sun," said Rafat Jambi. Khalid Bin Waleed commented, "I have looked through the big telescope at Venus. It is at the middle of the sun. It is like an eye. The Sun is white and big and Venus like a black dot in it." 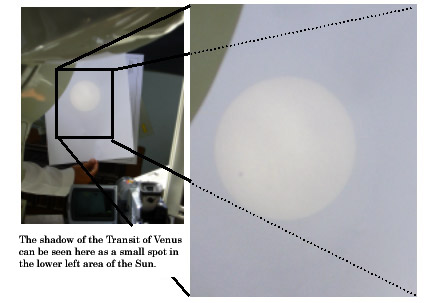 The group also visited the College of Astronomy and Science at King Abdul Aziz University "We learned that the first recorded sighting of the Venus transit was made by the Muslim Arab scientist Al Farabi, from the city of Farab, Turkmenistan, in the year 910 A.D.," said Rafat Jambi. "I asked my students to take the current temperature every hour until the eclipse ended at 11:22 UT (2:22 PM local time)," said Rafat Jambi. The students noticed that the temperature decreased one point between 8:00 UT and 10:00 UT (11:00 A.M and 1:00P.M. local time). The current temperature at 8:00 UT was 38.1, at 9:00 UT was 37.1, and at 10:00 UT came back into 38.2 Celsius. Saeed Bin Umairah said, "I feel happy to be an active member in my society. I do protect my environments and study the rare phenomena."

A transit, in astronomical terms, is when a small astronomical object passes in front of a larger one; in this case, Venus passed directly between the Earth and the Sun. Mercury and Venus are the only planets that orbit closer to the Sun than the Earth; therefore they are the only planets that can transit the Sun from an Earth observer's perspective. Transits of Mercury are more common than transits of Venus, and occur every three to thirteen years. The next one will occur on November 8, 2006. Venus orbits the Sun just over three times in the time it takes the Earth to orbit twice. This means that Venus passes between the Earth and the Sun roughly once every nineteen months. However, there are usually only two transits of Venus per century. This is because Venus and Earth orbit the Sun at a slight angle to each other. When we watch from the Earth, Venus usually appears to pass above or below the Sun, rather than crossing it. 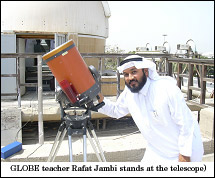 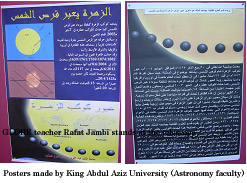