Students and teachers from the Edmund Burke School in Washington, D.C. and the Realschule Cuxhaven in Cuxhaven, Germany, partnered with GLOBE Principal Investigator David Brooks over the past year on a research project to compare space-based data with ground-based data to assess the performance of aerosol retrievals. On October 3, they presented the results of their research at the International Astronautical Conference in Bremen, Germany, to space officials from around the world, including Dr. Adena Loston, the NASA Associate Administrator for Education, who spoke about NASA's new Education initiatives at an Education Plenary at the IAC. Their paper, entitled "Scientist-Teacher-Student Partnerships for Aerosol Optical Thickness Measurements in Support of Ground Validation Programs for Remote Sensing Spacecraft," is now a formally recognized publication of the International Astronautical Federation. 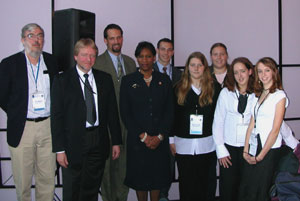 Over the past year, GLOBE students Gianna D'Emilio and Jordan Glist from Edmund Burke School, and Sylvana Martin, Katharina Dede and Isabel Neumann from Realschule Cuxhaven, collected data using handheld sun photometers developed for GLOBE. They tried, whenever possible, to time their measurements to coincide with overflights of the Terra and Aqua spacecraft which monitor how Earth's atmosphere, lands, oceans, solar radiation and life influence each other. Both of these spacecraft carry the Moderate Resolution Imaging Spectroradiometer (MODIS), an instrument that uses light reflected from the Earth/atmosphere system to infer aerosol optical thickness.

The Aerosol Robotic Network (AERONET) site at NASA's Goddard Space Flight Center provided professional measurements against which to compare student measurements taken by the students at Edmund Burke school. The German school site in Cuxhaven, a port at the mouth of the Elbe River on the North Sea, provided an opportunity to assess MODIS performance along coastlines.

Comparison of Burke data with AERONET showed no significant differences among those data sources. "This project demonstrated that the AOT values obtained from GLOBE sun photometers compare favorably with professional ground monitoring such as provided by AERONET," said Dr. Brooks. Data from Cuxhaven showed the same small positive bias in MODIS aerosol retrievals that has been observed at other coastal sites. "Thus, this work has demonstrated that GLOBE aerosol measurements can be used to help in the validation of MODIS measurements at sites where AERONET instruments are not available," said Dr. Brooks.

Dr. Brooks concluded that "as long as quality control is maintained, as it must be for any instrumentation network, there is every reason to believe that GLOBE sun photometer measurements taken by students can play a significant role in understanding the temporal and spatial variability of aerosols. Comparisons between GLOBE measurements and aerosol retrievals from the MODIS instrument are strikingly similar to comparisons of MODIS data with other ground-based aerosol measurements, demonstrating that working partnerships between scientists, teachers and students provide opportunities for geographically dispersed research that is impractical for scientists to undertake by themselves."

WHAT THE STUDENTS LEARNED:

The students from Edmund Burke and Realschule Cuxhaven reported that they found this project interesting, so interesting in fact, that they even continued to report data during weekends and the summer holidays! They said they learned that it requires commitment and a great deal of self-discipline to provide the complete measurement coverage, which included weekends and holidays. The students said they also came to appreciate the value of teamwork for sharing the responsibilities of the project. "They learned that students from both schools had the same challenges and difficulties yet all recognized that teamwork and self-discipline is a very, very important part of science you cannot normally learn at school," said teacher Georg Hatterscheld of the Realschule Cuxhaven.

The students also came to have a greater appreciation of science and the role students can play in it. "The impact this project has had on my education is tremendous," said Gianna D'Emilio. "It's been a great learning experience for me to see the way professional scientists work and share their ideas. I never would have believed that my ninth grade science project could help scientists at NASA improve their satellite sensor, and yet that's what GLOBE allows students to do, be involved in helping scientists with their work."

All of the students commented on the tremendous experience they gained from having the opportunity to make a presentation at such a large international conference involving space officials and scientists from around the world. "This day was wonderful," said Sylvana Martin of the Realschule Cruxhaven. "It was great to present my school at the Congress and to talk to many people." Her classmates, Isabel Neumann and Katharina Dede agreed. "I think it was one of our greatest days in our life," said Katharina. "It was a special day in my life," echoed Isabel.

GLOBE student Jordan Glist also participated in the IAC Education Plenary and had the opportunity to ask Dr. Loston about NASA's efforts to improve scientific and technological literacy as envisioned in the NASA strategic plan. Of his participation, Jordan says "the panel session brought together a number of students with top scientists and educators, all of whom were from countries across the GLOBE. It provided an opportunity for issues related to scientific and technological education to be brought up, and most importantly, all of these came from students. The panel session also demonstrated a 'handing down' of information, significant because it will be these students who will, in future years, take over the roles of many of these scientists."

As Dr. Brooks noted, "the role of teachers is central to the success of such a project. A teacher's participation and input is essential to help students deal with the realities of collecting data and understanding real data." Both Frank Niepold of the Edmund Burke School and Georg Hatterscheld of the Realschule Cuxhaven played a strong role in this project and concluded that their efforts were well worthwhile!

"I think we have really done some great work over the year and the proof of concept relating to students doing real science has been accomplished and then some. My two students have shown to the scientific and political world that high school students, with the proper support, can do real science and do it well," said Frank Niepold.

"During this project, my students have learned more than they would have in 10 school years," concluded Georg Hatterscheld. "Very often, they ask why do they have to learn this? What will I need this for later? At the IAC, the students got an impression why they have to learn. The people around them with different knowledge and from different nations were very kind to them and recognized them as members of a community interested in science."

This experience also had an impact on the teachers. "I am very proud of them, and they serve to inspire me to teach even more. They have engendered a sense of wonder in the minds of my students who have just begun this potential road of true science education," Frank Niepold said.

Read the NASA article on this story! (clicking will open a new browser window).