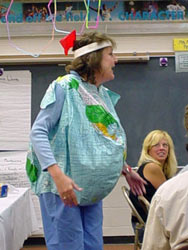 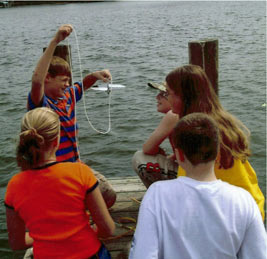 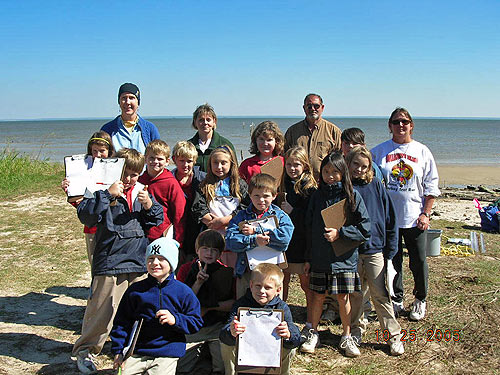 Hollingers Island Elementary School in Mobile, Alabama are ready to take GLOBE hydrology measurements as part of the Bay2Bay program linking Mobile Bay with the Taganrog Bay of the Azoz Sea in Russia. 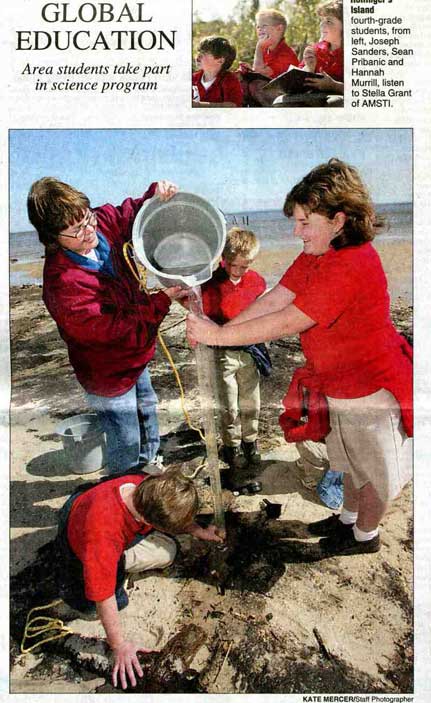 GLOBE in Alabama (GIA) was established in 1999 as a state-based partner of The GLOBE Program. GIA is administered by the National Space Science and Technology Center (NSSTC), which is a formal partnership between NASA and the State of Alabama's seven research universities. Operational funding for GIA has been provided by the University of Alabama in Huntsville's Earth System Science Center, the NASA Marshall Space Flight Center, the Alabama Space Grant Consortium, the Alabama Department of Economic and Community Affairs, and the Alabama State Department of Education (ALSDE). GIA has been able to build on these strong funding partnerships by leveraging the infrastructure provided by the GLOBE program.

Since 1997, the GIA partnership has trained teachers in 569 Alabama schools - over 40% of the total number of K-12 schools in Alabama. Through GLOBE in Alabama, the GLOBE Program provides the integral technology component to the Alabama Math, Science, and Technology Initiative (AMSTI) www.amsti.org. Essentially, GLOBE provides the critical "technological glue" for AMSTI, providing "real-world, real science" applications for math and science concepts.

A key component of AMSTI is a mentoring program conducted by math and science specialists - classroom educators loaned to AMSTI sites by the school systems each AMSTI site serves. The AMSTI mentoring program mirrors the GIA mentoring model begun in 1999, in which regional GLOBE teacher mentors provide assistance, feedback, and coaching for other GLOBE teachers. In schools where GIA mentors were working, a nearly 100% increase in GLOBE student data reporting was noted. GIA mentors now work within AMSTI's regional site framework to support the implementation of GLOBE into AMSTI. With the continued support of the State of Alabama, GIA will establish a growing network of mentors who work with AMSTI site specialists in providing support for all AMSTI teachers.

GLOBE in Alabama, in partnership with the Alabama State Department of Education, has correlated GLOBE activities and protocols with the 2005 AL Course of Study: Science (COS). GLOBE activities and protocols are aligned with the grade level-specific COS learning objectives. The GLOBE protocols and learning activities complement AMSTI's inquiry-based modular math and science units, to create a comprehensive mathematics, science, and technology curricular package for Alabama's K-8 teachers and students. GLOBE protocol training is also incorporated into the two-week Summer Institutes required of all AMSTI teachers. GLOBE in Alabama has developed additional content resources such as learning activity guides and teaching PowerPoints, which are made available to AMSTI-GLOBE teachers in CD-ROM format, as well as online through the GIA website, www.globe.uah.edu.

External evaluation results indicate that AMSTI is highly successful in improving student achievement. Students in AMSTI schools are scoring significantly higher on the Stanford Achievement Test (SAT-10) in math, science, and reading, and on the Alabama High School Graduation Exam, as compared to schools with similar demographics that had not participated in AMSTI. A second-year evaluation, recently released, confirmed the findings of the first. Significantly, the evaluators found that the inquiry-based approach used by AMSTI and GLOBE was especially beneficial to lower-performing students, helping them to make even more substantial progress.

GLOBE in Alabama envisions a continued partnership with UCAR - GLOBE, the Alabama State Department of Education, and support from NASA and the National Space Science and Technology Center (NSSTC) research institution affiliates. GLOBE in Alabama's primary objective continues to focus on the support of teachers and teaching, as well as learners and learning of mathematics and science throughout the state. GLOBE in Alabama's collaboration with AMSTI offers a coherent and rigorous mathematics and science curricular program for Alabama's students of the twenty-first century.