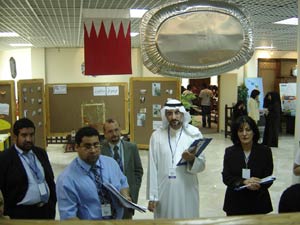 The judges for the Bahrain GLOBE Young Scientist Fair 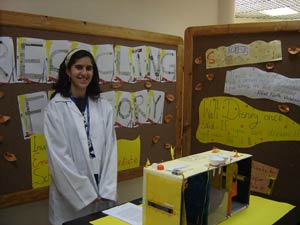 Eman A. Kareem and her winning project, "Recycling Paper Machine" 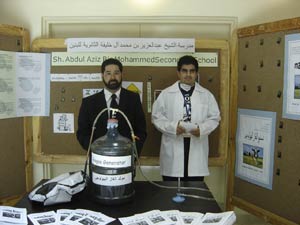 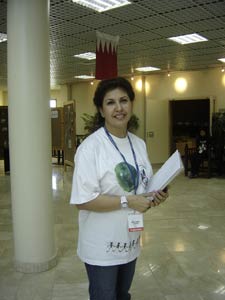 Once again, the GLOBE Program of Bahrain completed a student activity with great success! On May 9, 2005, the First GLOBE Young Scientist Fair was held at Shaikh Khalifa Institute of Technology under the patronage of his Excellency the Minister of Education, Dr. Majid Al Nuaimi, and the United States Ambassador to Bahrain, William Monroe. Students exposed to GLOBE materials and the scientific method creatively developed environmental science projects on a variety of locally-relevant topics such as water quality, recycling, and alternative fuel sources.

The day started with a welcoming speech and an introduction of the nine student contestants whose projects were selected previously as the best from the total of fifty projects submitted for the competition. After the speech, a committee of expert judges explained the criteria by which the projects would be evaluated. Each student then presented his or her project to the judges.

The winner, Eman, won a trip to Washington D.C to attend a science fair presented by Discovery Channel. "I really did not expect to win the first prize. Even if I wouldn't have won I would still be glad that I worked hard and came up with an interesting invention, I had a lot of fun recycling paper. I just can't wait to go to Washington.D.C.," said Eman.

The contestants met the challenging morning with grace and maturity. The air was full of excitement for the other GLOBE students and teachers. As Salman said, "It was great fun, I really enjoyed it. It was a good chance to express our ideas and interests too. I also enjoyed explaining my project to experts to see what they think about it. I am very proud of gaining the second place!"

The GLOBE Team of Bahrain expresses its hearty thanks to Shaikh Khalifa Institute of Technology for the use of the Institute and its friendly administration. Special thanks also go to Ebraheem A. Kareem, Senior Public Relations specialist at the Ministry of Education.

Tokens of thanks go to the guests of honor, his Excellency Dr. Majid Al Nuaimi, the Minister of Education, his Excellency Mr. William Monroe, the American Ambassador, and Dr. Nasser Al Sheikh, the Director of Intermediate and Secondary Education. Furthermore, this event would not have been possible without the great effort and support by all the GLOBE students and teachers from GLOBE schools throughout Bahrain.

Here are some sample projects: