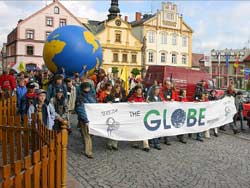 The town of Česká Třebová, Czech Republic, hosted the 1st European GLOBE Games from May 6 to 8, 2005, an expansion from the traditional Czech GLOBE Games. More than 400 students and teachers from 13 countries (Croatia, Cyprus, Czech Republic, Denmark, Estonia, Hungary, Latvia, Lebanon, Netherlands, Norway, Poland, Slovak Republic and Switzerland) participated in the event. Organizers, visitors and special guests brought the total number to nearly 550! Petr Baboucek, Director of TEREZA Association, which is the Country Coordinating body for GLOBE in the Czech Republic, said, "I'm quite happy that GLOBE Games allowed for so many students and teachers from different countries to meet and I believe that this meeting will facilitate their continued cooperation. I hope that this year's [European] GLOBE Games have begun a European tradition which will continue in the coming years in different countries." 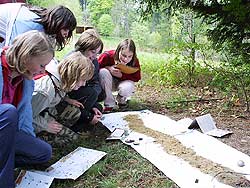 TEREZA has now hosted GLOBE Games in the Czech Republic for eight years in a row and has always welcomed schools from other countries to participate. This year they accepted the challenge to organize the European GLOBE Games to begin a new tradition. Dana Votapkova, Country Coordinator for GLOBE in the Czech Republic, said, "We organize GLOBE Games every year with one of the most active Czech GLOBE schools. This year the GLOBE Games were hosted by Gymnazium Česká Třebová. The Games were held under the auspices of the County Council of Pardubice and the City Council of Česká Třebová. There were many organizations, schools and volunteers that helped and the feeling of cooperation was really great. Thanks to them, there were also many accompanying programs available for participants." 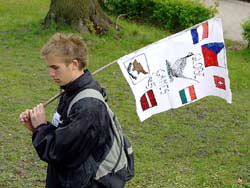 Schools were organized into teams, mixing the International students with selected Czech students. While the student teams competed, teachers had the opportunity to participate in several different programs, for example: "How are the Spruces" (a practical demonstration of how to examine the health of spruce trees) and "Understanding GLOBE Student Data" (GLOBE data activities to use in the classroom). The school that traveled the longest distance to attend (also from slightly beyond Europe's borders) was the American Community School in Beirut, Lebanon, represented by teacher Renee Codsi and 4 students. All students agreed that it was an amazing and incredible experience. Ms. Codsi said. "It was fantastic seeing the cooperation between the students from different countries." Even though cold and rainy weather threatened, participants filled the streets of Česká Třebová and, as has been the tradition of the Czech GLOBE Games, pushed the huge inflatable globe from the host school to the site of the GLOBE Games. 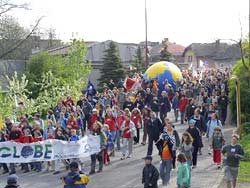 Everyone on hand agreed that it was an exciting event. Jana Ledvinova, Director of GLOBE Europe, said, "GLOBE Games was a fantastic, successful activity and the organizers have my greatest admiration and respect. I consider it to be one of the most effective long-term methods of motivation for students and teachers to continue in the GLOBE program and to develop it." Gary Randolph, Regional Director for GLOBE in Europe, said, "What an amazing event - not only to allow students the opportunity to practice GLOBE protocols but also to see old friends and make new ones, to have fun and to promote international cooperation!"

2001 (Estonia): A Model of Teamwork: Learning Expedition in Estonia