Dr. David Brooks, GLOBE Principle Investigator (PI) for Aerosols and Water Vapor, attended the Estonian GLOBE Games, which were held at a summer camp on the shores of the Baltic Sea near the town of Kuuresaare on the island of Saaremaa from August 9 to 11, 2005. Students and teachers from Estonia, Latvia, and Finland gathered to practice GLOBE protocols, make new friends and develop partnerships. Dr. Brooks initiated the visit after hearing about the activities during the GLOBE Games held in Prague, Czech Republic, several months earlier (See: "Czech Republic hosts 1st European GLOBE Games.") 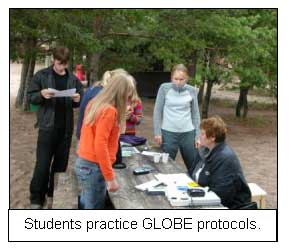 Ülle Kikas, Country Coordinator for GLOBE Estonia, has been interested in Estonian GLOBE schools beginning to collect aerosol data using the hand-built sun photometer. Dr. Brooks brought three of these instruments to the GLOBE Games and discussed the Aerosols Protocol with two groups of teachers and students. There is currently an Aerosol Robotic Network (AERONET) sun photometer at Toravere, in the southern part of Estonia. The weather at Kuuresaare was not very cooperative, with sporadic rain and overcast skies. Enough sun came through the thin clouds on one afternoon to demonstrate the operation of the sun photometer, but not to collect usable data. 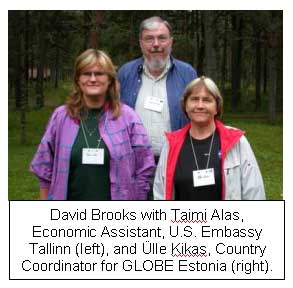 Dr. Brooks also showed participants how to find and interpret satellite over flight times on NASA'sEarth Observatory Web site and presented an introduction to the CALIPSO and CloudSat missions as well as other satellites in NASA's "A-train" series of Earth observing platforms based on a presentation given at the previous week's GLOBE Annual Conference in Prague, Czech Republic. (See: "CALIPSO and CloudSat Education and Public Outreach programs partner with GLOBE and NASA CONNECT"), CALIPSO and CloudSat are scheduled to be launched in the fall of 2005. The teachers were very pleased with the clarity of his presentations and interactions during the GLOBE Games. Ülle Kikas added, "Participation of a real American scientist was encouraging for the students."

Dr. Brooks' trip was sponsored by the U.S. Embassy in Tallin, Estonia, and GLOBE Estonia.