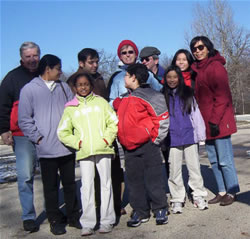 For the community of Lisle Illinois, the Morton Arboretum is "a place for trees, a place for people, and a place for fun." In late 2005, GLOBE teacher Maureen Nolan from Steeple Run School, decided it was a perfect place for GLOBE too. So Maureen loaned the arboretum some extra equipment, and with the help of Illinois GLOBE Training Coordinator Greg Lopatka, installed it into the arboretum's weather station in November. Since then, at least one of Maureen's students (accompanied by a parent) has been at the arboretum every Saturday at solar noon, collecting air and soil temperature, clouds, contrails, Phenology and precipitation data. The good attendance demonstrates that the students and parents were very receptive to volunteering on weekends. Greg's 6th grade granddaughter from nearby A. Vito Martinez School even took over for the Steeple Run students while she was visiting over Christmas break.

Steeple Run has been a GLOBE school for two years, and Maureen has been a GLOBE teacher since 2003. Maureen's students collect and submit GLOBE data in Hydrology and Atmosphere protocols, and she is making plans to add GLOBE Phenology activities both at her school and at the arboretum this spring. "The arboretum has its own school ID, so it is interesting to compare its data to data that is collected at Steeple Run, which it is about 8 kilometers away," says Maureen.

Since the initial setup and data observations, 15 students from Steeple Run School have visited this site and reported data at least once. After the students collect the data, they then enter the data into the GLOBE data base at school, or at home. The students' collaboration with the arboretum will continue every week until school lets out for the summer, after which Maureen hopes to continue collecting data working with her summer day camp students. "We hope to have several Steeple Run students in the summer program to lead the way," she adds. 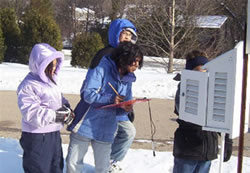 Morton Arboretum has been enthusiastic and supportive of this collaboration with the Steeple Run students, even going so far as to set up free admission for the GLOBE students and parents so the observations could be made. The arboretum first had contact with GLOBE in the mid-nineties, when they had two GLOBE-trained teachers. They were reintroduced to GLOBE in June 2004 when Greg began working with the arboretum's summer camp. Greg says this was an easy task, since "they already had a weather station and a computer lab for sending data." Greg enjoyed the presence of Maureen's GLOBE students in the summer camp session, noting that they were his "instant experts."

Steve Leonard, Manager of Youth Education for the Morton Arboretum, is excited about the "endless" possibilities he sees for the arboretum with GLOBE Protocols. "Our next step is to review the protocols with our Manager of Natural Areas to see what data can assist him in monitoring different parts of the Arboretum. What is great for the students is they can actively participate with an international science community to compare one climatic region to another."