GLOBE Partner Expedition to Antarctica: Looking Back in Time to See the Future

Earth's climate is changing, with thawing glaciers and melting of the sea ice shrinking at rates that are occurring far quicker than climate models have predicted. A growing body of knowledge indicates that the warming of the air near the surface and the melting of the ice are due to increased concentrations of greenhouse gases such as CO2 in our atmosphere. 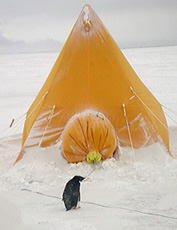 Predictions of future atmospheric CO2 levels expected to occur by the end of this century range from 500 to 900 ppm. The last time that atmospheric CO2 levels were this high occurred between 25 and 40 million years ago. During this time, the Antarctic ice sheet retreated hundreds of miles inland during warm periods, which resulted in sea level rises of over a hundred feet. Indeed, studying this time period is like looking back to our future.

From October through December of 2008, an International Polar Yearexpedition called Offshore New Harbor will image sediments located below the sea floor that were deposited when the Earth was transitioning from a Greenhouse World (>34 million years ago, Ma) to an Icehouse World (34 Ma to Today). This project is part of the ANDRILL Program ANtarctic DRILLing, a multinational initiative with the objective to recover stratigraphic core records for the use of interpreting Antarctic's climatic, glacial, and tectonic history for the past 50 Ma. The expedition team will include scientists, students, and a schoolteacher who will live on the sea ice while collecting data that will seismically image the sediments that lie beneath the sea floor in the New Harbor area. Using new technology, this expedition promises to explore undiscovered country by imaging these sediments that were deposited across the Greenhouse World to Icehouse World transition (55 - 25 Ma). The objective of this expedition will be to locate the optimal site to drill these sediments in the near future. 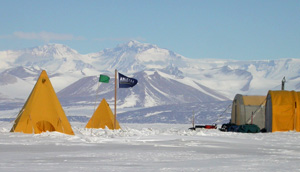 In early October, the team will fly from Christchurch, New Zealand to McMurdo Station, the largest base in Antarctica. It will be early spring in Antarctica with temperatures typically in the -29 to -34 C range (the minus 20s F) plus wind chill. After the team is given survival training, they will traverse by vehicles across the sea ice to offshore of New Harbor. There they will conduct the seismic and gravity surveys, while living on the sea ice and sleep in unheated tents for 35 to 40 days. The location is among the most beautiful in Antarctica, with towering mountains and active and extinct volcanoes surrounding the camp on three sides. The team will include Dr. Stephen Pekar (lead PI, Queens College, CUNY), Dr. Marvin Speece (Co-PI, Montana Tech), Dr. Gary Wilson (Professor at University of Otago, New Zealand), Ms. Brown (a teacher at the Promise Academy, which is part of the Harlem Children's Zone), as well as students from Queens College, Montana Tech and New Zealand.

A number of educational activities are planned while on the ice. An exciting educational opportunity will be our collaborative efforts with U.S. GLOBE partner Dr. Allan Ludman of Queens College in Flushing, New York, in which meteorological data will be collected while out at the remote field camp in Antarctica, and data will be entered into the GLOBE Web site for use in student research.

To learn more, visit the Offshore New Harbor Expedition Web site. For information about how the findings of the McMurdo Expedition will benefit GLOBE student research, read the recent article from the Queens College Newsletter.