Teachers in every corner of the globe recognize that effective Science, Technology, Engineering and Mathematics (STEM) education is critical in order to succeed in today's world and be competitive in an integrated global economy. Today, an understanding of scientific and mathematical principles, a working knowledge of computer hardware and software, and the problem-solving skills developed through scientific inquiry are all vital components of an education that meets the need for a dynamic, well-educated workforce. In order to interest students in mathematics and science, it is important to have teachers who are not only enthusiastic about these subjects, but who have professional training and access to ongoing professional development opportunities. 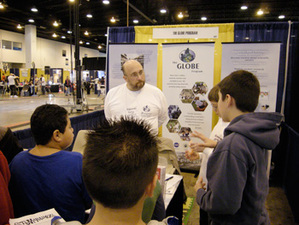 STEMapalooza took place on 24 - 25 October 2008, at the Colorado Convention Center in Denver, Colorado, USA, and featured exhibitors from around the state of Colorado that support STEM programs for students and educators and employ hundreds of thousands of graduates in STEM related careers. This two-day event introduced fun activities and networking opportunities focused on science, technology, engineering, and math initiatives from across the state of Colorado. The event was sponsored by the Center for Applied Science and Mathematics for Innovation and Competitiveness (CASMIC) funded by the University of Colorado Denver, the National Science Foundation, private foundations, and individual donors.

STEMapalooza was able to realize its goals to link together the economy, technologies and education to encourage the next generation of innovators and workers. Featured guest speakers, on 24 October, were Governor of Colorado Bill Ritter and Dr. Tom Cech, 1989 winner of the Nobel Prize for Chemisty.

Denver will host another free science education event as part of Denver Arts Week. Polar-Palooza comes to Denver on the evening of 14 November 2008, at the Denver Museum of Nature and Science. The evening will feature Polar-Palooza: Stories from a Changing Planet, a multi-media road show of scientists and explorers sharing stories of what research in the Earth's most remote polar regions is telling us about how and why our climate is changing – and what those changes mean for the people of Colorado. The presenters will bring the story of the poles to life using documentary video, scientific visualizations, original artifacts, and research tools, and field gear. After their show the presenters will mingle with the audience. Participants can see a 130,000 year-old piece of ice, try on extreme cold-weather gear, do a hands-on experiment that shows you how blubber protects seals from extreme cold, and learn an Alaskan Native dance.

Polar-Palooza, supported by the National Science Foundation (NSF) and NASA's Science Mission Directorate, in collaboration with local science centers and museums, and Apple Computer, is an official part of International Polar Year (IPY) which is being observed from March 2007 – March 2009. Polar-Palooza began its national tour of the United States on October 2007 and is traveling to 25 communities across the country by early 2009.

During IPY, more than 50,000 researchers from 63 nations are traveling to the Poles via plane, ship, snow mobile, and dog sled to explore the regions using everything from hi-tech ice core drilling (see the GLOBE Partner New Harbor Expedition Web page) to satellites in space. Polar-Palooza is working with video crews in many of the research sites in Antarctica and the Arctic, and many interesting and educational podcasts, videos and blogs can be found online at The Polar-Palooza Web site.