The Denver / Ulanbataar Sister Cities school collaboration project was begun in 2005 to establish an educational and cultural exchange between high school students in Colorado and Mongolia. The organization paired Denver Center for International Studies in Denver and Tuba City Boarding School in Tuba City, Arizona, with Ireedui Tsogtsolbor (Future Complex) in Ulanbataar and Erdmiin Dalai Tsogtsolbor (Ocean Knowledge Complex) in Mandalgovi, Mongolia. Each of the four schools established a student club to learn about the other's culture, history and geography, and focused on establishing communication between the schools so that students could interact online. 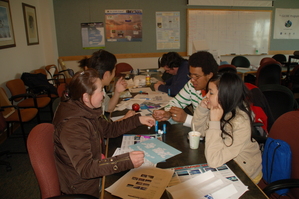 During the second year, a physical exchange was arranged between the schools in Mongolia and Denver for the students and teachers to actually meet. Partnerships were established with the Denver Zoo and with the Navajo Nation in the U.S. The support for the 2006/2007 exchange program came from additional donations by Khan Bankand the Zorig-US Foundation.

Initially begun as a cultural exchange project, the Sister Cities worked through the GLOBE Program to expand the project to include a series of on-going environmental projects for the students to share through the GLOBE program, in November of 2007. The environmental projects are relevant to, and will be implemented in, both countries as well as on the Navajo Reservation. During the school year, the teachers will task students to research into environmental threats occurring in their local communities.

With this new environmental awareness focus in place, four Mongolian students and two teachers traveling to the U.S. in March 2008 participated in an environmental education program (Conservation Camp), put on by the Denver Zoo and the Aspen Environmental Research Institute in Aspen, Colorado, alongside their American friends. They also visited other partner schools in Arizona and Colorado, U.S. GLOBE Partners Mansel Nelson from Northern Arizona University, Carol Bylsma of Forest Song Associates, Deanna TeBockhorst of Colorado State University, and GLOBE Program Staff to discuss integration of the GLOBE Program into existing activities.

In late June 2008, the American students traveled to Mongolia to visit their partner schools. After short visits to respective communities and schools, the delegation and the participating Mongolian students gathered in Gun Galuut, a community-organized Protected Area on the Kherlen River east of Ulaanbaatar. With the assistance of representatives of the Denver Zoo and the Initiative for People Centered Conservation (IPCC), the Mongolian, Denver and Navajo students began project implementation in Mongolia. In order to collect a sufficiently diverse quantity of data in the Gobi districts to help them answer their research questions, they enlisted the help of participants from other Gobi district high schools in the effort. According to Ms. Harriet Downer of the Denver Sister Cities Organization, "The mutual exchange of students and teachers provides an invaluable cross-cultural experience for the participants. Additionally, it provides many more students and teachers, who meet and travel with the exchange participants, with a broader knowledge and understanding of Mongolia, the U.S. and the Navajo society." Logistical help came from O. Tserennadmid, director of the Zoring Foundation and Luke Meinzen, a U.S. Peace Corp volunteer, in Mongolia. Additional support was provided by QGX Limited.