Dominic is a vibrant and inquisitive fourth grader in El Paso, Texas, with a growing interest in science. He has been taking part in school science fairs ever since he was in kindergarten, when he first investigated the principle of Candy Triboluminescence. 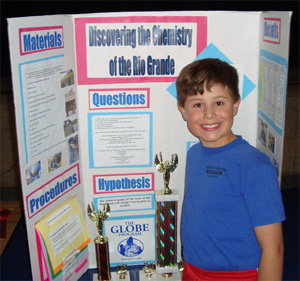 Dominic wanted to know why a spearmint Lifesaver candy sparks when it is crushed or chomped on. In first grade, he advanced to Bubblology. He thought it was great fun experimenting with a variety of bubble-making formulas. In second grade, he presented the Presence of Hydrogen (pH) with a cabbage indicator using kitchen liquids: milk, lemonade, juice, etc. Dominic delivered these presentations in Spanish, his native language. Last year, in third grade, he presented for the first time in English. His project focused on Gas Producing Foods. He compared green beans, potatoes, and carrots in fresh, frozen and canned states. He was able to conclude that canned or processed green beans produce more gas than the other foods he tested. Every year he has earned a prize for his project. Last year, he took top honors in his school, receiving the Sweepstakes Award, at the 3rd to 6th grade school science fair, allowing him to move on to the District level competition, where he won the District Sweepstakes Award.

This year, Dominic consulted family friend, Albert Ortiz (GLOBE Teacher and Master Trainer in Southern New Mexico and West Texas) to discuss possible ideas for this year's Science Fair. Mr Ortiz is an exemplary teacher who is always happy to help. In fact Mr. Ortiz has personally donated GLOBE equipment to schools in Latin America, including schools in Argentina, Chile, and soon Uruguay. He was delighted to talk to Dominic about the chemistry of the Rio Grande River, its ecosystem and the GLOBE protocol that he has used with his students at Desert View Elementary School in Southern New Mexico. Dominic watched the GLOBE Hydrology video provided by Mr. Ortiz and began to wonder what he might discover about the water in the Rio Grande.

Dominic, his dad, his cousin and Mr. Ortiz took a field trip to the Rio Grande one Sunday afternoon in September to investigate the hydrology along the river. Dominic made observations about the area and asked many questions. He learned how to use a GPS device. In order to answer his questions, he learned how to take air and water temperature, Total Dissolved Solids (TDS), pH, Dissolved Oxygen, Nitrates, and Ammonia Nitrogen using the GLOBE protocols. He was excited to be able to use "real" scientific instruments and mix "real" laboratory chemicals safely, all under the watchful eye of two adults. He was answering his own questions and so Dominic decided that this would be his 4th grade science fair project!

He began asking more questions at school, reading about water quality in the USA and developed his hypothesis: Does water quality change from location to location on the Rio Grande? Again, Dominic and his crew went out to the river to test the water quality of the Rio Grande. He took samples and readings upstream, at the water treatment plant run-off, and downstream. He found that the treated water from the city mixes very well into the chemistry of the river. Now he had to write his report and make a project board detailing his title, hypothesis, materials, procedures, results and conclusions. His dad helped him with his data presentation and his mom coached him on his presentation voice. He practiced speaking in English about every detail of his project in the car on the way to and from school.

In late October 2008, Dominic's class at Alicia R. Chacon Elementary School held its first-round science fair. His teacher had to select the best projects in Earth Science, Life Science, Physical Science and Chemistry. When asked if his project made much of an impression, Dominic responded that his teacher's jaw dropped; "Se quedó con la boca abierta!".

The school held its annual 3rd to 6th grade Science Fair on 6 November 2008, and Dominic took top honors, known as the Sweepstakes Award. He proudly displayed his trophy in his bedroom. But it wasn't over yet for Dominic!

The Ysleta Independent School District conducted its District Science Fair on Saturday, 6 December 2008, at the YISD Central Office. There were over 200 3rd – 6th grade Science projects in Physical Science, Life Science, Physics and Chemistry. Dominic delivered a 26 minute presentation to the judges who looked over his display board carefully, checked his written report for correctly cited bibliographic sources, complimented Dominic on his use of college-level words, and scored his project. At the end of the day, the results were in: in 4th grade Chemistry, from among approximately 65 entries, Dominic tied for First Place! Quickly, phone calls were made to grandparents and family in Santa Fe, New Mexico and in El Paso, Texas. Albert Ortiz, his project mentor, was very pleased with the results of his project. Mom and Dad were so proud of his knowledge and interest in chemistry that they celebrated at a local restaurant! Way to go, Dominic!

A special thanks to Mr. Albert Ortiz, Dominic's project mentor, and Dr. Robin Hoffer, GLOBE Partner at the University of Texas at El Paso, for their work with GLOBE in Southern New Mexico and West Texas.