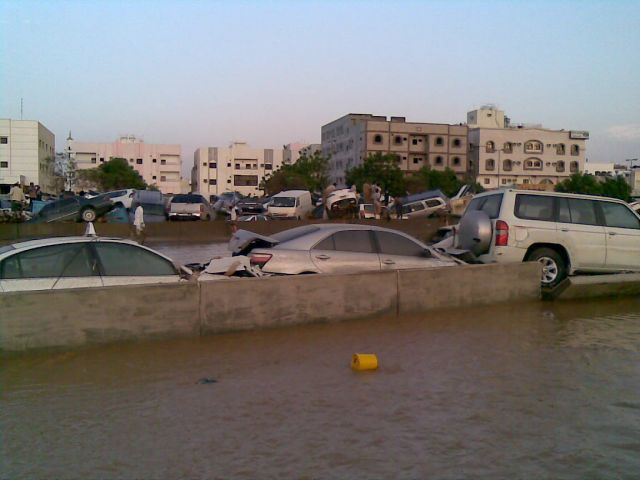 On 25 November 2009, Jeddah, a Saudi Arabian port city located on the coast of the Red Sea, awoke to heavy rain and a sky filled with lightning. The rain continued for approximately six hours, turning into a devastating flood that claimed the lives of at least 124 Jeddah citizens through drowning, car crashes, and other tragic accidents. Water filled the streets of Jeddah, destroying everything in its wake and causing a full blackout of electricity across the city. Losses were estimated at 9,878 cars, 10,751 houses and business losses of billions (one billion SAR being equal to $266,666,768.53 in U.S. dollars.)

While external factors may have contributed, this volume of rain was highly uncharacteristic for the city of Jeddah. In the aftermath of the floods, GLOBE Deputy Country Coordinator and Master Trainer Rafat Jambi, his teaching colleagues in the city, and their students turned tragedy into opportunity by collecting rain measurements at three of the seven GLOBE schools in the city, and at Jeddah Science Innovation Club.

The Kingdom of Saudi Arabia joined the GLOBE Program on 30 September 2002, and has been a leader in the GLOBE Near East North Africa region since that time through the work of Country Coordinator Dr. Hadi Ali Bahari. Schools in Jeddah joined the program in 2005, and according to Rafat Jambi, "in six years of GLOBE observations in Jeddah, measurements have never been this high." Long time citizens of Jeddah claim it has been 37 years since the city has seen such a great volume of rain. GLOBE students will continue to perform research that may point to reasons for this type of drastic change in weather and climate patterns.