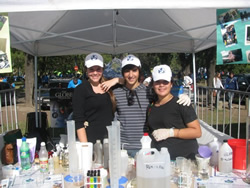 Each day millions of people in many countries walk an average of six kilometers a day to access drinking water. In 2010, a series of 6K run/walks aimed at raising awareness about the need for water rationing took place over 24 hours in 200 cities across 180 countries and six continents. The 2010 run/walk was initiated and driven by Live Earth, a for-profit company founded by Emmy-winning producer Kevin Wall, in partnership with former U.S. Vice President Al Gore. Live Earth integrates events and media to inspire a global movement aimed at solving the most critical environmental issues of our time. GLOBE community members actively participated in the event by involving teachers and students, including those from Instituto Industrial Luis A. Huergo, to increase the awareness of water conservation through efforts and investment in sustainable, scalable and replicable water projects. Developed in the Netherlands, "Walking for Water" is a school-based program where participating students commit to walking six kilometers (3.73 miles), carrying six liters (1.59 gallons) of water, to raise funds to finance water projects in developing countries. Participating students are "sponsored" by their friends and family to participate in the walk. In 2009, the program raised more than $1.4 million to support clean, safe, drinking water projects. GLOBE provided an activity that can be adapted for children of all ages called Water Walk. 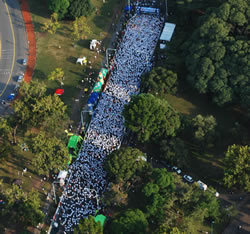 Buenos Aires had more than 9,000 participants at this year's event on Sunday 10 April at Palermo Lake, compared to 7,000 Run for Water participants in 2010. The event was sponsored by Dow, a multifaceted company that combines the power of science and technology with the "Human Element" to passionately innovate what is essential to human progress. After the race, many of the participants attended several educational activities about water and the environment at the Water Park in the Plaza of the Planetarium. A GLOBE booth was awarded to GLOBE Argentina, providing the opportunity for participants to engage in real GLOBE Hydrology activities. Marisa Dilernia, a GLOBE Teacher from Tecnico Huergo, was invited and cooperated with her students. GLOBE Argentina Master Trainers Marta Kingsland, Beatriz Vazquez Mercedes Acosta, and Latin America-Caribbean Regional Help Desk Officer Amalia Aubone were also present. 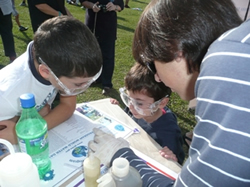 GLOBE students learned about their local bodies of water, surrounding land cover, and water chemistry issues and presented their research during this year's 2011 Run for Water event. They gathered information and data from Riachuelo stream waters, a river in the capital port that leads into the Rio de la Plata. GLOBE students demonstrated and presented their Riachuelo water chemistry investigations to a large and enthusiastic public based on GLOBE's Hydrology Protocol on pH, Turbidity, Alkalinity, Salinity, and Temperature. 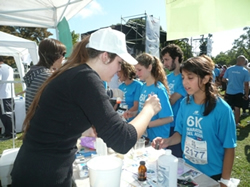 The Live Earth Run for Water provides an excellent setting for the combined effects of outreach, education, and awareness on many environmental issues that in turn provide to the public on GLOBE opportunities and contribution of its students, teachers, and schools. Amalia Aubone, Latin America-Caribbean Regional Help Desk Office representative, commented on the "remarkable large attendance of young people who were interested in the GLOBE Program, expressing concern for the care of the environment and the need for change in everyday life from the knowledge provided by environmental education."