Mr. Wade Geery, a GLOBE Teacher at Norfork Elementary School in Norfolk, Arkansas, has been involved in GLOBE since 1999. Over the years, he has found himself pondering his involvement with GLOBE, sharing that at times he asks himself, "Why am I still doing GLOBE? Most of the time I decide that my students and I have invested too much in it to quit, however, last year I rediscovered a much more compelling reason: the joy of recording student discoveries in our natural world." 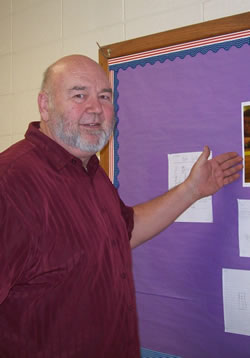 Throughout every teacher's career there are moments of overwhelming challenge, and moments when a student's eyes light up, reminding teachers they are doing their job well. Mr. Geery experienced one of the latter moments on 25 February 2010 as his students left the classroom to record their daily GLOBE measurements. Students were talkative and not yet settled down from lunch when two GLOBE team members ran back inside, jumping up and down and exclaiming that Mr. Geery must come outside and see the sun. There was no stopping the exodus of students heading for the back door of the classroom. Getting caught up in the excitement, he followed his class outside.

The sight was phenomenal. The sun shone brightly, surrounded by a multi-colored halo. Mr. Geery hastily took a photograph of the sight, using his hand to shield the sun in order to capture the effect. After taking the picture, he led the class back in and performed an internet search to learn more about this phenomenon. The students clamored to go back outside to see the halo again. To their dismay, less than ten minutes after their initial discovery, the halo was gone. The area of thin cirrus clouds below the sun had moved elsewhere. While the bright early afternoon sun continued to shine, the halo shaped rainbow did not. According to Geery, "Looking back, the photo is nowhere near as inspiring as the real thing." Geery heard several "upside-down rainbow" comments from rather unenthusiastic students. Yet, as you might deduce, the GLOBE students' excitement took much longer to simmer down. According to Ms. Lynne H. Hehr, GLOBE Arkansas Partner, "Working with Mr. Geery for more than a decade, I know of many instances like this that illustrate his dedication to his students as he encourages 'teachable moments'. His dedication to their understanding of the world around them is a model for us all as he provides them the opportunities to not only experience phenomena such as this, but also research information to help explain their experience. 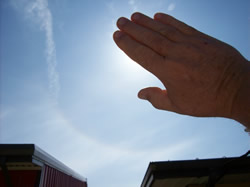 Later, Mr. Geery contacted former GLOBE Atmospheric Scientist Dr. David Brooks, who explained that what the class had seen was a "sun halo" or "sun dog." According to Brooks, "The halos form around the sun at 22 degrees (about a hands' width in the photo). They are caused by ice crystals in cirrus clouds (visible in the photo), acting as prisms. If there are a lot of thin cirrus clouds in the vicinity of the sun, and if the ice crystals are randomly oriented, you can get a complete circular halo around the sun. Usually, you see only a partial halo, as in this photo. These halos are not common, but they are not rare during cold weather, either. I occasionally see small "sun dog" spots where I live, but it has been a long time since I've seen a halo this extensive."

"It was just the kind of thing I needed to revitalize myself and my teaching abilities," said Geery. "Without GLOBE, this and undoubtedly many other fascinating natural occurrences would have been lost to the inquisitive minds of my students. By taking the opportunity to make observations, the rewards are sometimes much more than you could have ever imagined. Why do GLOBE? Let's just add another reason to an otherwise unfinished listing."

Dr. Brooks (who has supported Mr. Geery's projects for several years) comments that "at a time when students are more interested in looking down at their mobile phones than up at the sky, it is especially rewarding to find teachers like Wade who can inspire their students to observe their natural environment and – yes – even to be excited by those observations." Currently, Mr. Geery and his students are working on a project that involves placing two pyranometers from Dr. Brooks' Institute for Earth Science Research and Education, one pointing up and the other down, on an atmospheric research balloon. (Pyranometers are instruments for measuring solar radiation.) Mr. Geery's students have been measuring solar radiation on the ground for several years. The planned flight should take these instruments to an altitude of 80,000 feet (about 25 km) or more and should provide some fascinating data for the students to analyze after the flight.

Dr. David Brooks has developed an approach to photographing the sky in the immediate vicinity of the sun. Read about it and also see aureole photographs here.

Read about additional achievements from GLOBE Schools in Arkansas: