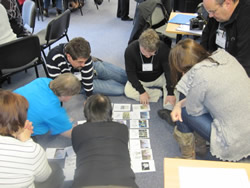 On 10-13 March 2011, GLOBE Teachers, Trainers and Scientists from Belgium, Estonia, Switzerland, and the United States met in Estonia for a four-day Seasons and Biomes workshop. The organizing team consisted of Dr. Elena Sparrow, PI of the ESSP Seasons and Biomes project as well as the Alaska UAF GLOBE Partner Coordinator, Ms. Martha Kopplin, Project Coordinator for the Seasons and Biomes project and GLOBE Trainer, and GLOBE Scientist Mr. Bill Kopplin. The workshop took place at the Kubija Hotell located in a secluded pine forest not far from the town of Võru, in southeastern Estonia. Approximately 45 teachers attended from all over the country, as well as two GLOBE Trainers from Switzerland and three from Belgium. The United States Embassy in Tallinn, Estonia, provided assistance, as did the Estonia GLOBE Partnership and the ESSP Seasons and Biomes project.

The workshop would not have been possible without Estonia Country Coordinator Dr. Kaido Reivelt, and Ms. Ketlin Piir, Project manager for GLOBE Estonia, who worked hard to organize the event. Prior to the workshop, the organizing team met with personnel from the U.S. Embassy and the Ministry of Education who have been very supportive of GLOBE Estonia's efforts. Additionally, they met with science and technology faculty at the University of Tartu, who are active in working with GLOBE teachers and students in Estonia. These faculty members demonstrated to the team how well GLOBE activities align with Estonia's educational priorities. The workshop was developed with the following goals in mind: 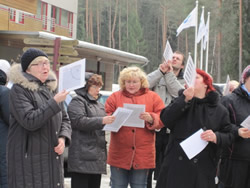 The day began with a brief welcome and introduction to GLOBE and the Seasons and Biomes project. The theme for the first day from the GLOBE Model for Student Scientific Research was Observation. Teachers spent time outside learning about cloud types and how to estimate cloud cover. They also learned how students can keep cloud journals to collect their observations. Teachers were advised on the importance of calibrating instruments and the need for standardized procedures in observations, measurements and ground validation of remotely sensed data. Martha Kopplin read Earthlets, as Explained by Professor Xargle, by Jeanne Willis to complement the day's theme. Teachers were then led through activities to explore what causes the seasons (the tilt of Earth and the angle of incidence of solar radiation), followed by two of the GLOBE Earth System Poster activities, which provided an excellent opportunity to see how the components of the Earth system interact. The day concluded with practice using GPS and instruction on how to set up a study site. 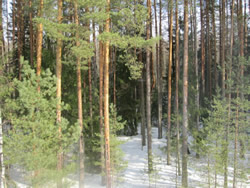 The focus of the GLOBE Model for the next day was Asking a Question. Dr. Elena Sparrow read Sky Tree by Thomas Locker and introduced Phenology Protocols Budburst, Green Up and Green Down. Teachers had time to practice the protocols using partially sprouted twigs and laminated, pressed leaves. Leaf Man, by Lois Ehlert was read before teachers worked in small groups to tackle an inquiry activity using laminated leaves. Trainers modeled the process for guiding students from making observations and inferences to asking a research question and deciding whether the question can be answered by conducting an investigation, consulting with experts, or using published materials. For the questions that required an investigation, the teachers were then asked to provide a hypothesis and design an investigation to test their hypothesis. The session finished with each group formally presenting their questions and how they would investigate them. The teachers devoted a great deal of energy to the task, contrived high quality questions and demonstrated a thorough command of the English language in presenting their work. One teacher later used one of the inquiry posters in her presentation during a day-long workshop focusing on student investigations, conducted by GLOBE Estonia for teachers who could not be away from their classrooms to attend the four-day workshop. 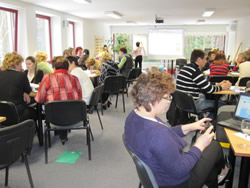 The third day's theme from the GLOBE Model was Collecting and Analyzing Data. The first part of the day was spent teaching air temperature and precipitation Atmosphere Protocols, allowing teachers enough time to practice with the equipment. They were then split into two smaller groups so the teachers that came to attend the one-day workshop could also be accommodated. Dr. Sparrow introduced her group to the Seasons and Biomes activity How to Make a Climograph, while Ms. Kopplin led her group through the GLOBE website, demonstrating how to access archived data and how students can enter the data they collect. The groups then switched so they could engage in the other activity. Finally Mr. Markus Eugster, GLOBE Teacher and Trainer from Uzwill, Switzerland, shared two projects that he has been working on. The first was information on the lessons he has been developing to accompany the DVD Spaceship Earth, a 1997 TV series written and directed by Nicolas Gessner. Second, he explained how classrooms can join his Seasons in My Biome (SIMB) project, where students photograph a site near their school from the same angle once a month and upload them to his website in order to compare seasonal change at their own site, as well as with the other sites posted. Later, at the request of the teachers, Bill Kopplin gave a presentation on Alaska, showing slides of the various biomes around the state. 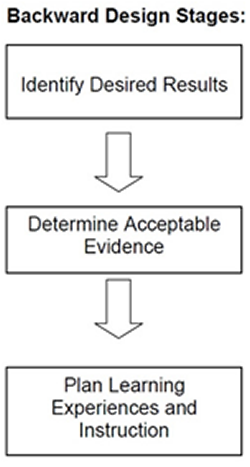 On the final day, teachers were invited to discuss alternative assessment, sharing how they might assess student learning in ways other than by using paper and pencil. Teachers discussed how they teach to enhance student learning in math and science, including a number of the practices modeled throughout the workshop. These included working in small groups (cooperative learning), using inquiry, integrating across the curriculum, giving presentations, modeling, and many more. Trainers shared a resource, Understanding by Design, by Grant Wiggins and Jay McTighe, to introduce the idea of Backward Design in developing lessons. This is a three-step process where you first identify your desired results (what concepts and skills you want students to know), then determine acceptable evidence (how you will know if students have achieved the desired results) and finally what learning experiences and instruction you should plan so students will demonstrate they have performed effectively. This was a good time to let the teachers reflect on what they had learned in the workshop that they might want to use in their classroom to support their curriculum and their GLOBE activities. Teachers were given time to work separately or together to develop their own implementation plan. 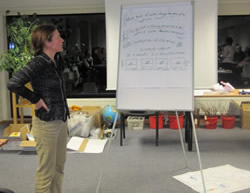 Throughout the four days, teachers were asked to reflect on how they might benefit from the workshop. At the end of each day, teachers wrote down what activity they thought was most useful to them. At the very end of the workshop, they shared whether they had met their goals and rated each of the different activities on a scale of 1 to 10 (1 being of least benefit and 10 being of most benefit). This information will be very helpful to GLOBE Estonia as they assist teachers and plan future workshops.

The workshop was enriched with a delightful excursion to the Piusa sand caves, not far from the border with Russia. This is a historic site where local people excavated sand high in silica that was used to make glass for over a century. Led by their tour guide, Aiki, teachers learned about the history of the area, including the culture of the Setomaa (Setu people) who have lived there for centuries and speak their own language, which is quite different from Estonian and Russian. Additionally, the team visited Kääpa Põhikool (Kääpa Comprehensive School), for students aged 6-15, where Aiki teaches. She gave the teachers a tour, explained the pattern of the school day and introduced them to other staff members. Ms. Kopplin stated, "We also had the opportunity to meet and talk with some of the students, which was the highlight of our trip."

At the close of the workshop, a short "graduation" ceremony was held. Dr. Kaido Reivelt handed out Seasons and Biomes certificates from GLOBE Estonia. Ms. Kopplin expressed, "It had been a long four days of hard work but we were so grateful to have met so many outstanding teachers. I think we learned as much from them as they learned from us. We hugged each other and said not goodbye, but until we meet again."

GLOBE would like to thank the devoted team of GLOBE Estonia partners, scientists, teachers, and trainers, who made this event possible. Teachers in Estonia will return to their classrooms with a revived sense of effective teaching methods, passing enthusiasm on to their students by employing new and fun activities in and outside of the classroom.

What is the Seasons and Biomes Project?

Read about the latest student activities in Estonia: