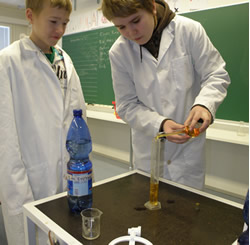 GLOBE students and teachers at Palokka School in Finland closely monitor and gather data measurements of their schools neighboring Lake Palokkajärvi, a small lake in Central Finland. The school was constructed in 1977 alongside the lake, and students from several surrounding areas commute to the middle school; with roughly 50 educators teaching grades 7-9 and 550 students. Lake Palokkajärvi provides the opportunity for Palokka Finnish students to study and research the importance of the environment through GLOBE.

The lake is approximately 3 km long (roughly 2.0 miles), and is 94.4 meters above sea level. The lake reaches a depth of 10.2 meters at its southern end in Tyyppälänlahti. Throughout the past seven years, the students of Palokka School have taken different measurements of the lake including the amount of Dissolved Oxygen in water, the Water Temperature, Water Transparency (by Secchi disk), Electrical Conductivity, pH (by pH-paper), meter depth, freezing and melting of the ice in Lake Palokkajärvi. 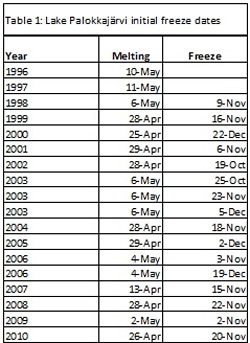 In Finland, lakes generally freeze in the month of November or at the beginning of December. Students from GLOBE Teacher Mr. Tossavainen Markku's science classes observed Lake Palokkajärvi's initial freezes for the past five years. GLOBE students observed that the lake alternated between November and December months every other year, except for 2006 with the unusual occurrence of freezing twice. Lake Palokkajärvi froze twice that year with the initial freeze in November followed by December. A very sharp decrease with initial freeze dates of the lake from 2004-2005 were observed. This may be attributed to the trend observed that Lake Palokkajärvi's first freeze occurs during mid-month, except for 2005 early arrival date of 2 December. The thickness of the ice when the lake is frozen is about 50-70 cm. GLOBE students at Palokka collected data on the freezing and melting of ice in Lake Palokkajärvi. Previous trends and observations of the lake suggest that ice melts at the end of April or beginning of May, and freezing occurs at the end of November, beginning of December. Melting of ice in the springtime has significantly changed over several GLOBE monitored years. Table 1 presents the data gathered by GLOBE students between the years of 1996 and last spring of 2010. April 2007 was the earliest recorded ice melt observed during these years, when springtime was very warm and the latest year in May 1997. Ice thickness in Lake Palokkajärvi averages about 40-65 cm and Mr. Markku's science classes measured ice thickness of the lake. Ice thickness varies in depth with temperature severity of the winter. Students' data collected from this year's (March 2011) ice thickness of the lake measured about 62 cm, which correlated with the coldest winter days at -30°C (-35°C 18 Feb 2011). 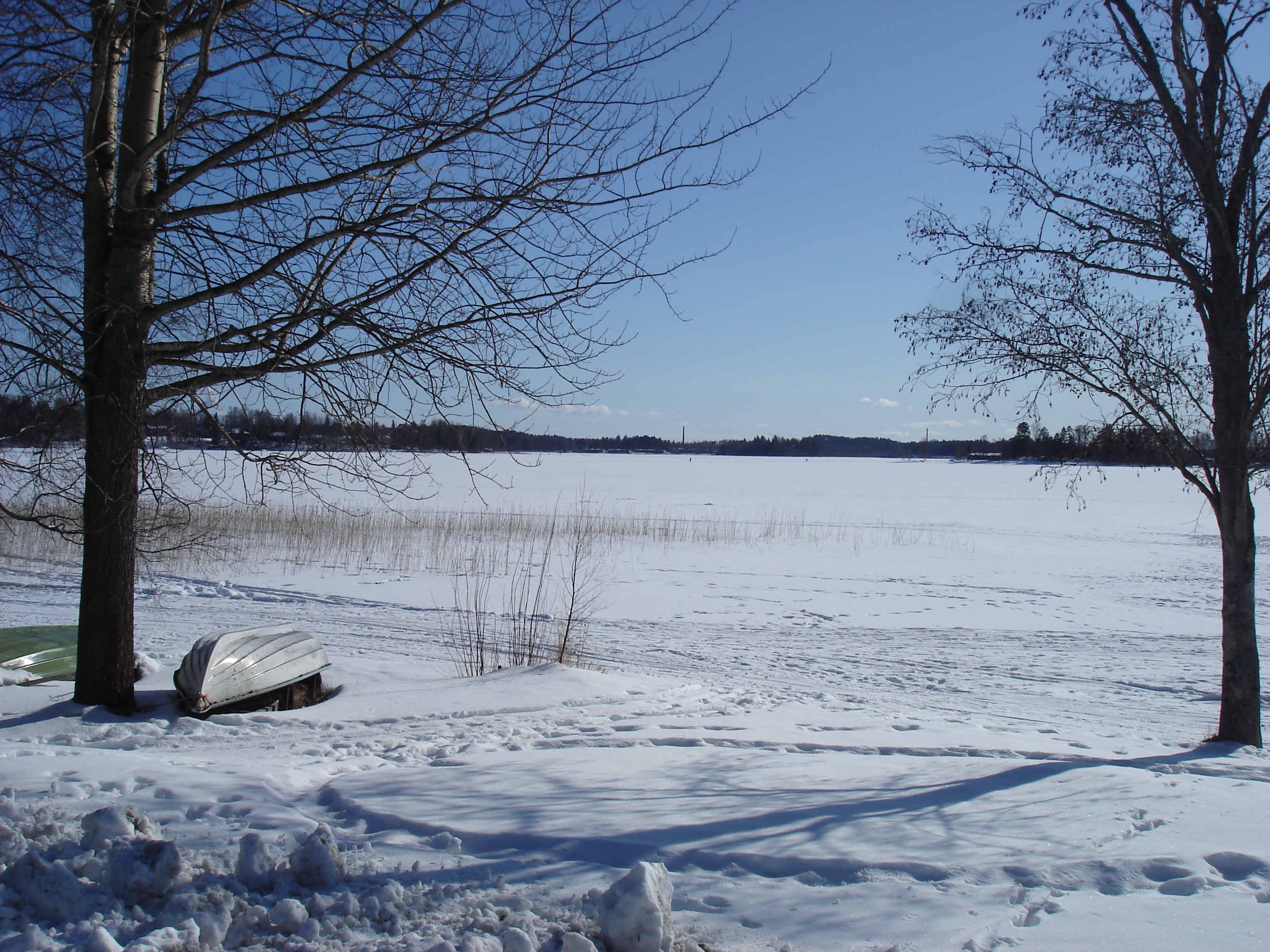 When the lake freezes early (October) and melts late (May), there are decreased concentrations of dissolved oxygen in the water at the end of winter. This happened during the winter of 2002-2003 and can be fatal for inhabiting fish. They can die due to lack of oxygen if it is not possible to swim to higher oxygen concentrations, such as on the surface. During autumn 2002, Lake Palokkajärvi froze very early (9 October). The autumn cold surface water sinks to the bottom and decreases the amount of oxygen in the lake water, decreasing full-rotation or circulation of oxygen in the water. During the winter month of February in years 2003, 2004, 2005, 2006, and 2010, GLOBE students measured the amount of oxygen at different depths of 1 m, 5 m and 10 m (bottom). Students drilled deep holes in the ice to reach water levels in order to gather samples of water from different depths. As previously mentioned, winter ice thickness and depth of Lake Palokkajärvi is roughly 50-70 cm, equivalent to over 2 ft of digging a hole through tough cold ice! Along with oxygen concentrations, students also measured water temperature and pH at different depths. 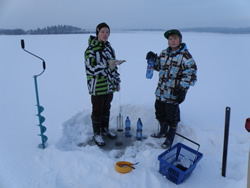 Winter of 2002-2003 was rough on many Finnish lakes; trends showed many lakes lacked sufficient oxygen concentrations and caused increased fish fatalities. Summer was very warm that year, and heated the water temperature of the lakes. When surface water temperature decreases rapidly, or begins an early freeze such as in October, the bottom water temperature is higher, and organic material dissipates, causing oxygen depletion at the bottom. In spring of 2003, this phenomenon of increased oxygen depletion caused fish mortality, possibly damaging the lake ecosystem. Although there were no fish fatalities in Lake Palokkajärvi, the deepest depths of the lake did indicate decreased oxygen amounts with only 2 mg/l; while surface concentrations were roughly 9 mg/l, indicating sufficient oxygen quantity. In 2005, GLOBE students such as Riki Hassinen and Aleksi Peltonen measured oxygen values, which were at its highest at 14.8 mg/l, which may be attributed to measurement or calculation error. However, in that year, higher oxygen values were observed throughout entire lake depths. 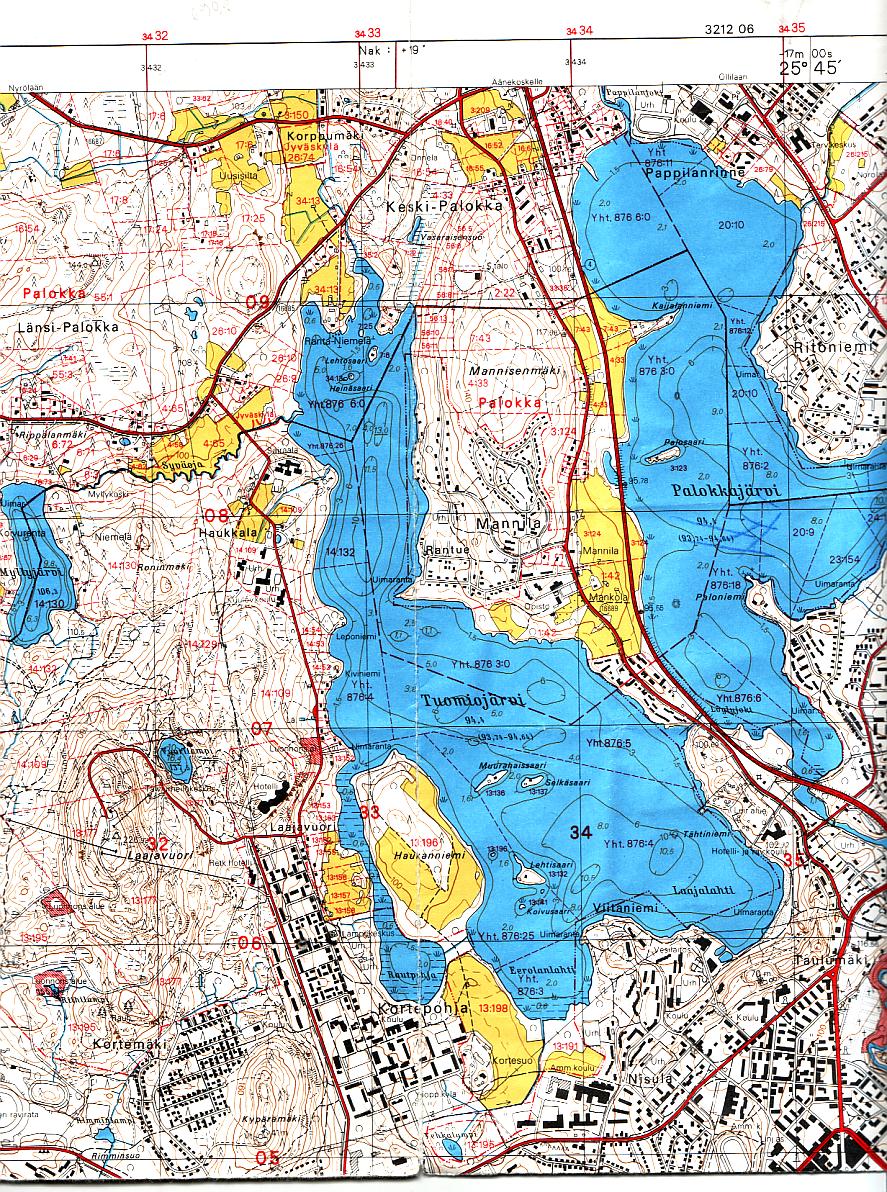 Tuomiojärvi Lake, located in Jyväskylä, Finland, is 3.5 kilometers long, 1.2 km wide, and 94.4 meters above sea level. The lake is also extremely shallow, reaching only 11.5 meters at its deepest point. Awareness of water quality is essential to Tuomiojärvi, as residents of housing developments along the coast depend on the lake for their drinking water. Lake Tuomiojärvi and Lake Palokkajärvi are connected by the Löylyjoki river, with six small streams also flowing into Lake Tuomiojärvi through fields or swamps. Vegetation such as Phragmites australis, Typha latifolia, Equesetum fluviatile and Nymphaea alba, are plentiful in the area.

Ninth grade students at Viitaniemi Comprehensive School performed Hydrology research at two locations on the lake, the first site at a depth of three meters, and the second along the creek at the southern end of the lake. At its widest, the creek expands to four meters, but in a dry summer can shrink to just one meter in width. Students tested both sites for dissolved oxygen content and also took several nutrient samples, hypothesizing that there would be plenty of nutrients in the creek but that the oxygen level would be low, having decreased throughout the winter. 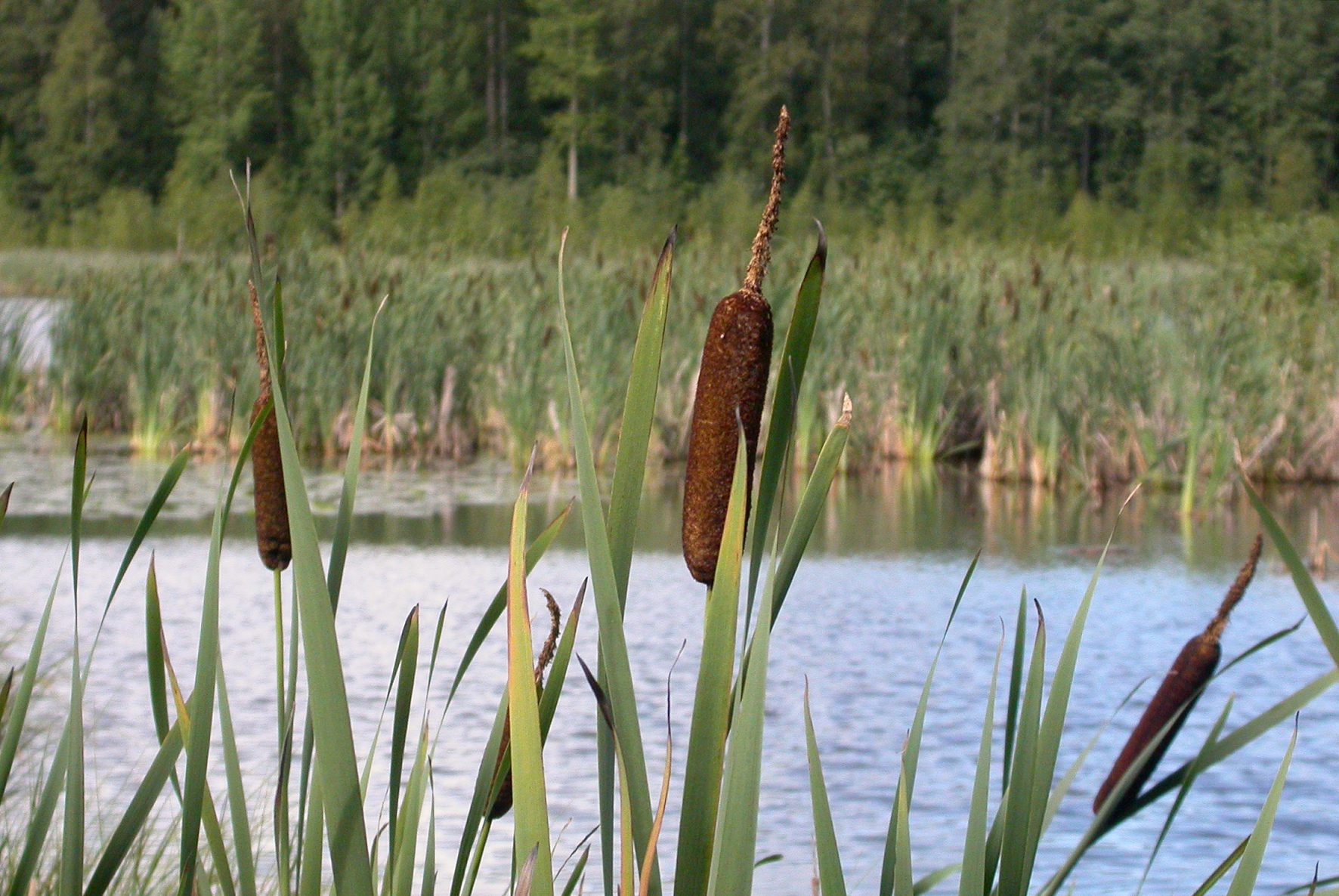 From 26 February to 30 March, students took eight water samples to test Dissolved Oxygen, Nitrate, and pH levels at the first study site. The highest level of oxygen found in the samples was 11.5 mg/l. The lowest amount of oxygen was only 6 mg/l, confirming the students' hypothesis that amounts decreased during the winter. The pH value of the water in each sample was 6.5. The amount of nitrate (NO3) was less than 10 mg/l. The group took six samples from the second site within the same date range. The highest oxygen level was 12 mg/l; the lowest was 9.75 mg/l. The pH value of the creek was 7 all winter. The amount of nitrate (NO3) was 25 mg/l. 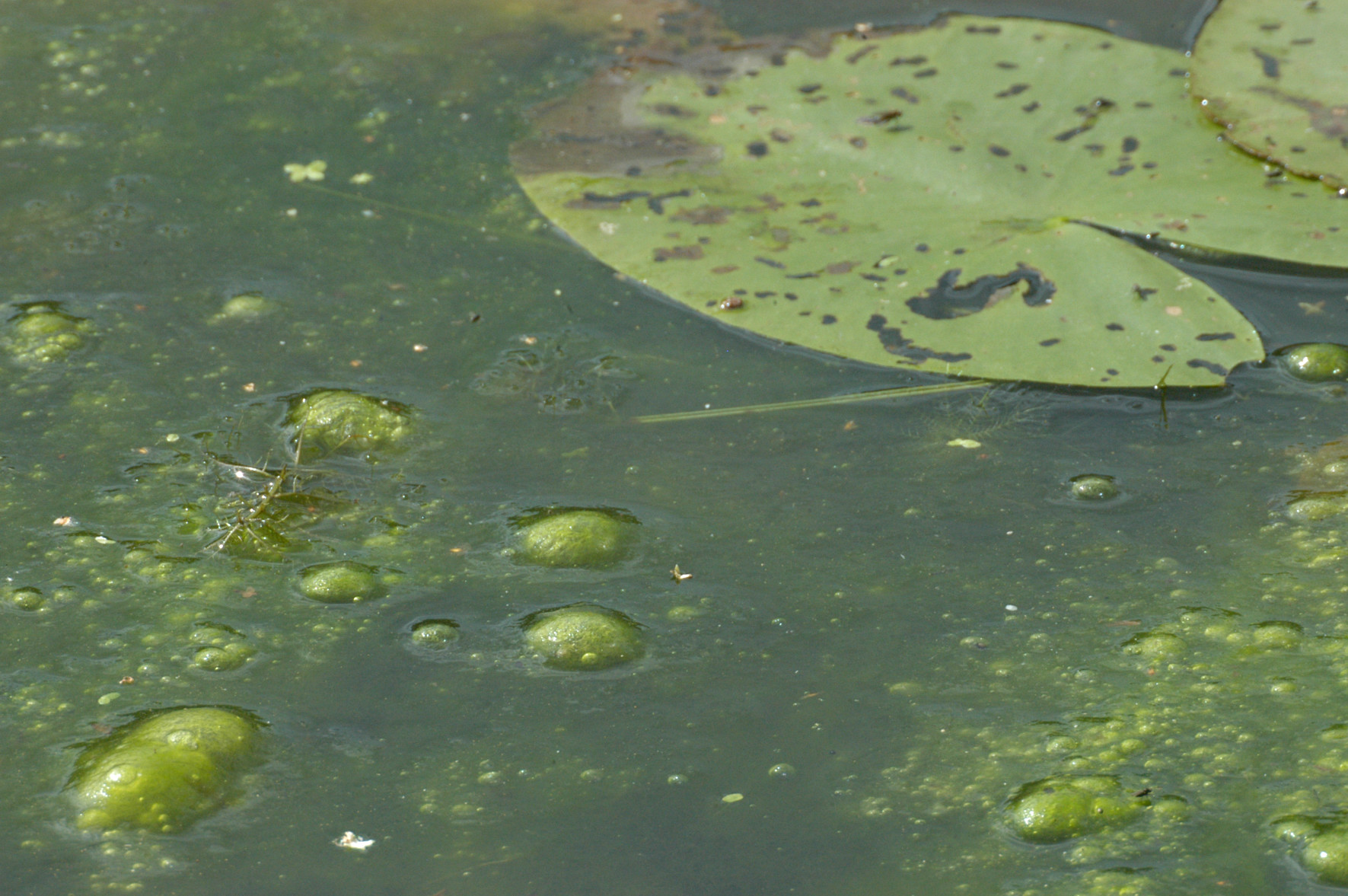 There are notable changes in the growth of organisms when the oxygen level in a body of water ranges from 4.5-6 mg/l. Most fish species avoid areas with low oxygen rates, and extreme cases of fish fatality appear in lakes with oxygen less than 3 mg/l. The amount of oxygen in Lake Tuomiojärvi reaches dangerously close to depletion in the winter when the lake is frozen. In the summer there can be a lot of Cyanobacteria (blue-green algae) in the waterand it can be dangerous tomost animal species. Additionally, there is an increased amount of nutrients in the creek due to the biological fertilizers that drain to the creek.

Based on the students' research, their recommendations for improving lake conditions are as follows:

· Reduction in the amount of fertilizers that are used in nearby fields,

· Careful selection of fertilizer type, based on soil analysis;

· Promotion of vegetation between creeks and fields so nutrients will not drain to creeks running to    Lake Tuomiojärvi;

· Increased fisheries management of coarse fish like roaches; and

· Prevention of eutrophication (a great increase of phytoplankton) of Lake Tuomiojärvi.

GLOBE students at Palokka School and Viitaniemi Comprehensive School realize the need to monitor and preserve their environments and do by utilizing GLOBE Research tools and methods.

Read more about GLOBE Hydrology studies throughout the GLOBE community: