Tradition is Born from Environmental Sensibility and Star Gazing in Macedonia 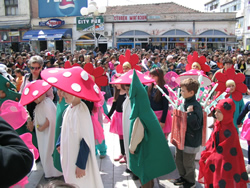 The Orde Chopela High School in Prilep is an incredibly active GLOBE school in the Republic of Macedonia. Since joining GLOBE in 2005, Orde Chopela High School has achieved significant successes at both national and international levels. Teachers promote GLOBE intensively among students, which resulted in the signing of a memorandum for cooperation between two high schools from Croatia and Bulgaria and the start of several collaborative GLOBE projects between the new cooperating countries. This school celebrates GLOBE annually on the anniversary of its inception, and also participates in research projects and campaigns, such as GLOBE at Night (G@N). 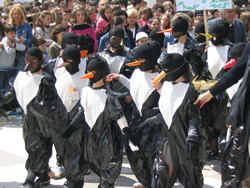 On 21 April 2006, after one year with GLOBE, Orde Chopela High School organized the first celebration to honor the birthday of the program, which also falls on Earth Day. The two events were celebrated together with the Minister and staff from the Ministry of Environment and Physical Planning, the Deputy Ambassador from the U.S. Embassy in Macedonia, the Head of the Peace Corps in Macedonia, all the GLOBE Schools in Macedonia, and many teachers and students from elementary and high schools. Ms. Natalia Aceska, Biology Professor and International GLOBE Trainer, is responsible for the initiative and introduction of GLOBE in Orde Chopela High School. She spoke with great honor about the GLOBE birthday celebration, stating, "It was incredible. A crowd of 10,000 students from ages 6 to 18 flooded the streets of Prilep towards the center of the town. The main street was closed to traffic as kindergarten students made drawings on the warm asphalt. Ecological messages and drawings on the streets combined with the beautiful voices of the talented young children from Prilep, while GLOBE Students from across Macedonia tested the quality of drinking water in the wells around town. I was proud to demonstrate the meaning of this program to all future generations. The GLOBE birthday celebration has become a tradition in the city of Prilep. It is the day the youth send messages supporting greater responsibility of the Earth's environment from each and every one of us."

Students at Orde Chopela High School also participate in the annual GLOBE at Night campaign. GLOBE at Night is a citizen-science campaign aimed at raising public awareness of the impact of light pollution by determining the magnitude of star constellations in the night sky. Students made observations and recorded data under the guidance of their mentor, Ms. Karolina Damjanoska, Professor of Physics. They determined the level of light pollution by using the Magnitude Charts on the GLOBE at Night website. 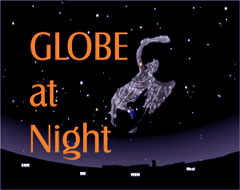 The Republic of Macedonia became involved with GLOBE at Night in 2008, and has continued the tradition for the past three years. Orde Chopela High School broadened the scope of G@N measurements by using Sky Quality Meters (SQM) to measure sky brightness. Under the guidance of Ms. Damjanoska, one student produced a paper on this topic, which contains the results from observations and measurements. The student describes the different types of light pollution and his specific experiments. He also competed in the 46th Gathering of Young Scientists from the Republic of Macedonia, held on 29 May 2010, at the Jahja Kemal school in Gostivar, in the field of Physics, with the subcategory "Light: Appearance and Application," for which he won the 1st prize. His research topic was entitled "Use of the Sky Quality Meter for Measuring the Sky's Brightness." In addition to the G@N campaign, students use the SQM meter for measurements throughout the year. Their goal is to conduct 500 measurements of the sky's brightness over Prilep and surrounding areas. 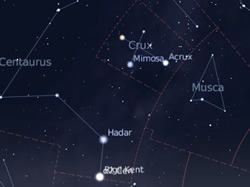 As result of the participation in the GLOBE at Night campaign in 2009, the Republic of Macedonia was listed among the top 13 countries in the world that conducted more that 100 registered measurements of light pollution. These measurements were conducted during a two-week campaign. Aceska stated, "We consider it an honor to be listed alongside countries such as Germany, the Czech Republic, and others that are more populace."

The success of GLOBE in Macedonia, including the annual birthday celebration and GLOBE at Night activities, is a testament to the dedication of the GLOBE Macedonia team of students, teachers, scientists, and community members, and made possible by the strong support from the Ministry of Environment and Physical Planning, the U.S. Embassy and the U.S. Peace Corps.