GLOBE Research in the Kingdom of Saudi Arabia Expands 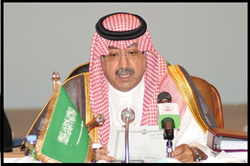 Over the past nine years, schools in Saudi Arabia have made impressive accomplishments through their GLOBE research, and Minister of Education His Highness Prince Faisal bin Abdullah bin Mohammed Al Saud and Their Excellencies the Vice-Minister Mr. Faisal bin Abdulrahman bin Muammar, Mrs. Norah Al-Fayez, and Dr. Khalid Al-Sabti are working together to support teachers by providing high quality professional development activities ensuring GLOBE implementation continues in both the boys and girls sections of the Kingdom's educational system. 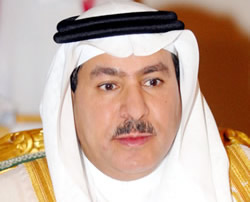 "We will expand our schools and research opportunities to the girls section too. We would like to share this knowledge with the world," Vice Minister of Education Faisal bin Abdulrahman bin Muammar said during his meeting with Dr. Teresa Kennedy when she visited Riyadh in April 2010.

Country Coordinator Dr. Hadi Ali Bahari and his team have been instrumental in the success of GLOBE schools across Saudi Arabia. During the 14th GLOBE Annual Meeting in Calgary, Alberta, Calgary in July 2010, Dr. Al Bahari stated, "GLOBE has provided many opportunities for our students to learn about environmental issues." 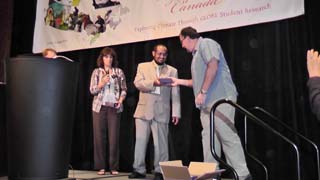 GLOBE in Saudi Arabia began with 6 schools in 2004 and by 2011 has grown to 115 schools, accounting for just about 26% of the GLOBE schools in the Near East and North Africa region. GLOBE professional development activities continuously occur and have provided 144 teachers across the country with sustainable implementation strategies. These dedicated Saudi teachers have placed a high priority on long-term data collection in order to monitor change over time in Saudi Arabia. Less than six months after students began recording data onto the GLOBE international database, their schools were included in GLOBE's Chief Scientist Honor Roll for their data contributions in atmosphere, hydrology, and soil investigation areas. To date, 524 Chief Scientist Honor Roll citations have been earned by Saudi schools and in 2007, three Saudi schools were highlighted for submitting the greatest number of measurements. Over 82.22% of the region's GLOBE measurements (463,293 out of 563,296 regional total) have been contributed by schools throughout the Kingdom of Saudi Arabia, and robust research projects using these data are beginning to link to projects underway in neighboring GLOBE countries. Many student research reports using their GLOBE data have been produced and several articles have been published on the GLOBE Web site. In 2010, Saudi Arabian school Hamzah Bin Abdulmutalib in Jeddah City was included in the top 10 list of GLOBE schools around the world ranking between 45,000-50,000 contributions to the GLOBE database.

Dr. Ali Bahari stated, "It is important to participate in GLOBE, as we need to share our scientific data with the world." He continued, "collaborating with other countries to collect and analyze these data, and exchanging information between students and scientists is one of themost importantfactors in validation of data and drawing conclusions that contribute to the generation of scientific decisions and theories that serve all humanity." Twenty three Saudi schools have been honored for their scientific contributions to the database through the GLOBE Honor Roll and have been named "Exemplary GLOBE Schools."

GLOBE Teacher Mr. Rafat Jambi, from the School of Hamzah Bin Abdulmutalib in Jeddah City, has focused on atmosphere investigations. His students also expanded on GLOBE at Night activities, monitoring the moon eclipse that occurred on 3 March 2007 at 21:30 UT, observing the rare eclipse of the transit of Venus 8 June 2004, observing the sun eclipse that took place on 3 October 2005, and gathering GLOBE atmosphere data in conjunction with their sun observations. This GLOBE Team also studies the effects of the tragic flood in Jeddah City that occurred on 25 November 2009 and is currently working on several interesting climate studies that they hope to share with the world in the near future. 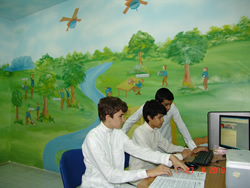 GLOBE Teacher Mr. Hani Felemban has focused on hydrology projects with his students at Prince Sultan Complex as they continuously take GLOBE measurements on the Red Sea, comparing the oxygen levels while also noting temperature effects on the marine life in several different study sites. Mr. Felemban's students have organized a GLOBE Office in their school, where all GLOBE equipment, data logs, and computers are stored, and also where data entry and student discussion on their research occurs. Students proudly showed Dr. Kennedy, Director of the International Division, their research reports and accompanying data records, graphs, and honor roll citations. Extremely impressed by their work, Dr. Kennedy stated, "this scientific documentation is the most organized and well-documented GLOBE research showing change over time that I have ever seen." In this picture, students from Prince Sultan Complex in Jeddah City show Dr. Kennedy their official data logs used to monitor the hydrology of the Red Sea. 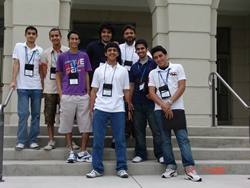 Four Saudi students were selected on 26 July 2009, as a result of a national competition, to participate and become trained for the Ocean for Life regional student research project in collaboration with U.S. GLOBE students. Components of the project took place in Washington D.C. and in the Cordell Bank Gulf of the Farallones, and Monterey Bay National Marine Sanctuaries, located in California, U.S.A.

Participation throughout the Kingdom of Saudi Arabia is now expanding significantly. Deputy Education Minister for Girls, Mrs. Nora Bint Abdullah Al-Fayez, appointed as the First Female Minister on 14 February 2009, expressed her interest to ensure Saudi girls participate in scientific research through GLOBE in April 2010 during a visit by Dr. Teresa Kennedy. Deputy Education Minister Al-Fayez stated, "There will be over 25 girl's schools participating in the program by the end of 2011." On 1 September 2010, GLOBE Saudi Arabia officially began this new priority, assigning Mrs. Noorah Alnasser as Deputy Country Coordinator for Girls. As of 3 October 2010, the Ministry of Education officially approved the regulatory framework for the consolidated program in both the boys' and girls' section. On 3 November 2010, the General Department for Student Activities (girls section) began to nominate schools to participate in GLOBE. In addition, teachers and local coordinators at education departments were also nominated.

"These new GLOBE girl's schools will join Saudi boys schools in continuing to lead GLOBE in the region." Mrs. Norah Al Nasser said. On 30 November 2010, the GLOBE Team was formed in the education section for girls, headed by Mrs. Norah al Nasser as the deputy country coordinator for girls, Mrs. Amal Al Hargan as deputy assistant for girls, and Mrs. Basma Alrashed as a technical support for the girls section. 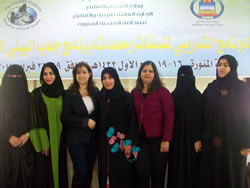 This event for girls, coordinators, and teachers marked the seventh workshop conducted by the GLOBE program in Saudi Arabia. Future plans of GLOBE in Saudi Arabia focus on increasing the number of schools implementing GLOBE protocols for both the boys and girls sections, and ensuring these data are used in student research projects.

The GLOBE Program Office thanks the Ministry of Education in Saudi Arabia for their continued support of the GLOBE Program and acknowledges the leadership of Dr. Hadi Ali Bahari, GLOBE Country Coordinator since 2008, Deputy Country Coordinator for boys, Mr. Khaled Huseen Alaseri, Deputy Country Coordinator for girls Mrs. Norah Ibrahim Al Nasser, and her assistant, Mrs. Amal Abdullah Alhargan, as well as Technical Support for boys section Mr. Rafat Ali Jambi and Technical support for girls section Mrs. Basmah Saleh Alrashid, for setting high standards for inquiry-based science education in Saudi Arabia and across the Near East and North Africa region. Acknowledgements are also given to former Country Coordinator Dr. Abdullah M. Al-Falih (Professor at King Saud University Teachers College), Professor Ibrahim A. Arif (Chair for Environment and Wildlife, King Saud University), and Mr. Abdulilah Musharraf, General Director of Curricula in the Ministry of Education, for their work to initiate GLOBE activities in the Kingdom of Saudi Arabia and continue their leadership serving as advisors to GLOBE in Saudi Arabia.