Students View Climate Differently From the Summit of Mt. Kilimanjaro

Mt. Kilimanjaro stands 5,895 meters or 19,341 feet above sea level. From this vantage point, the inquiring minds of GLOBE students went to work alongside dedicated educators and scientists who all gathered in Tanzania, Africa for the Kilimanjaro Xpedition––a climb up the largest freestanding mountain in the world.

The Kilimanjaro Xpedition is a GLOBE Africa and Seasons and Biomes endeavor that utilizes previous research alongside current measurements to illuminate a comparative baseline for future studies. This learning experience furthers students' understanding of climate in a fundamentally different way than in the classroom. 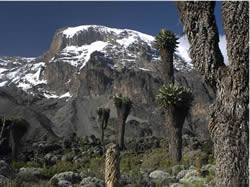 The mission on this annual trek is to study and report how climate factors evolve from year to year, from one biome to the next and why these changes occur. This initiative is driven by questions such as this one from GLOBE Student Jillian at James Monroe Elementary: "Which place gets more rain in a year, here in Washington or on Mount Kilimanjaro? Our atlas makes it look kind of the same." 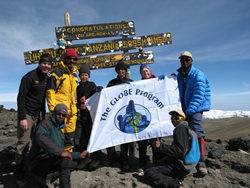 Assisted by one of the world's leading experts on permafrost research, Dr. Kenji Yoshikawa, associate professor at the University of Alaska Fairbanks, students and educators work together to collect GLOBE data measurements daily. The data is then uploaded to the worldwide GLOBE database. The team collects periodic Surface Temperature measurements by downloading data from digital sensors strategically placed higher and higher up each level of the mountain by the previous year's expeditioners. In addition, the crew collects modified Air Temperature and Cloud data at solar noon each day in order to submit data for each distinct biome, as well as permafrost measurements where it exists. "It has given my students a new sense of importance in their daily GLOBE participation to know that they really do share these interests and activities with students from all over the world," said Faculty Xpedition Member and former NOAA Teacher at Sea Ms. Barney Peterson.

This year, trekkers shared their daily thoughts and experiences in the Xpedition journal ––and it was a huge success online––receiving over 13,000 visitors from 92 countries and 1,152 cities over a nine-day span. More than 130 data measurements were collected and posted to the website via Google Earth. Additionally, over 500 questions were emailed to Base Camp; 78 were answered from the mountain and more were answered via email after the trek's conclusion. Hundreds of schools followed along and 128 new biomes were reported this year on the website. 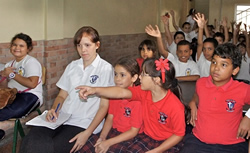 This year, for the first time in history, two live webinars were held from the mountain with over 100 participants in each session. GLOBE classrooms and community members from all over the world tuned in to hear on the spot reports from Xpedition leader Mr. Mike O'Toole and Peterson who is a GLOBE teacher at James Monroe Elementary in Everett, Washington. Fourth-grade student Kaleigh stated, "Participation in the webinar was important to me because my brother was in Mrs. Peterson's class last year and he told me all about what she was going to do. I also wanted to ask what the weather was like because it is Spring there and it is Fall here now. It was awesome that students and scientists got to talk." 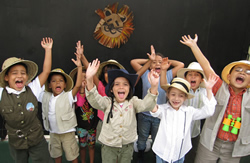 Students from Roswell Kent Middle School in Akron, Ohio, chosen as one of the Xpedition's Xemplary Schools, also followed the journey from their classroom, along with schools from all across the world. Ben at James Monroe Elementary said, "It really impressed me that they were on top of Mt. Kilimanjaro and we were all the way in Washington. Wow! We had kids from all different schools on the podcast!" Students from Notre Dame School in Santo Domingo suited up in their safari attire to follow the virtual trek online.

For Derrick and Shannon from Sao Bras Secondary school in Mossel Bay this was a once in a lifetime opportunity to be part of an international group participating in this really significant event. Shannon has been interviewed by both local and national media about his experience on the mountain and will be presenting slides to various local organizations. 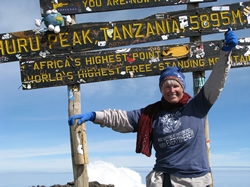 "Participating in the 2011 Xpedition, sharing the time and adventures with the team from South Africa, getting to know and work with the people from Tanzania, has been one of the best experiences of my life," Peterson said. "I really experienced the power of learning by immersion in unfamiliar and challenging situations and that gave me a refreshed view of what my own students go through as learners."

Mark Brettenny, Director of the GLOBE Africa Regional Office, GLOBE Tanzania, the local host, and the Tanzanian Education Department would like to thank all the participants from all over the world that once again supported this very successful GLOBE Africa initiative. We would also like to thank our main sponsor, PetroSA for their continued support in this venture and for helping us to engage the next generation of scientists. We value your participation and support, and we look forward to seeing you on the mountain in 2012.

Read about past Kilimanjaro Xpeditions: