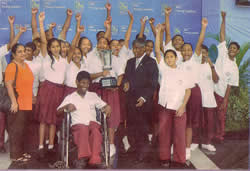 The Young Leaders Program of The Royal Bank of Trinidad and Tobago aims to help youth develop leadership skills and learn the value of working as a team. Beginning in 1981 as an essay-writing competition, the program broadened its scope in 1984 by challenging students to develop projects that would benefit the community, and in 1991, earned its current name. Since then, hundreds of students have participated in the competition to make tangible contributions to their communities through investigative science research. Almost every secondary school in the country now participates in the program, along with youth groups, vocational centers, and cadet forces.

Each year, students are given six months to complete their projects under a designated theme. The school placed third with their initial entry last year. This year's competition theme, "Water Beyond the Surface - Sustaining Life, Securing our Future," marked the 30th anniversary of the youth development program. More than 30 project entries were highlighted and guest speaker Dr. Kenny Broad, an environmental anthropologist for National Geographic, spoke to students about water conservation methods and encouraged them to make a commitment to respect their environment, making a positive impact daily.

Brazil Secondary School, a GLOBE School in Brazil Village, developed a greenhouse and hydroponic system at their school as a means of cultivating crops while also conserving water. Brazil Secondary students collected wastewater from various sources such as gutters and sinks around the school and filtered it for watering crops in their greenhouse. In just their second year to enter, this innovative idea earned Brazil Secondary students first place in the competition in 2011. The awards ceremony was held at the National Academy for the Performing Arts in Port of Spain, Trinidad.