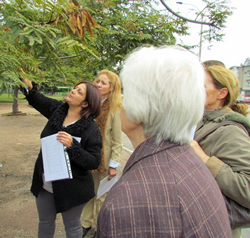 Since 1995, GLOBE schools in Uruguay have been recognized for their active student participation in national science fairs and international campaigns such as GLOBE at Night. On 26 May 2011, GLOBE Country Coordinator and GIAC Representative Lic. Andrea Ventoso organized a workshop at the Ministry of Housing, Spatial Planning and Environment to grow and sustain the GLOBE Program in Uruguay. Supported by the Latin America-Caribbean Regional Help Desk Office and the United States Embassy in Uruguay, the objectives of this workshop were to commend GLOBE teachers for their previous successes, encourage their continued participation with GLOBE, and to invite additional primary and secondary schools to join the GLOBE community in Uruguay. This was a memorable event, as it was the first time for Uruguayan secondary schools to be able to participate in a GLOBE certification workshop. 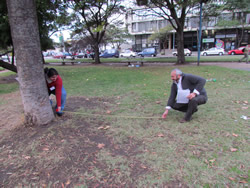 Workshop activities, assembled by the United Nations Environment Program (UNEP), utilized Earth System Science methods including GLOBE Land Cover protocols to promote the conservation of local forests. The year 2011 was declared the International Year of Forests by the United Nations General Assembly in order to "raise awareness on sustainable management, conservation and sustainable development of all types of forests." Students learned how to foster the conservation of native forests in Uruguay and built their own instruments in order to practice land cover protocols. The fusion of information about native Uruguayan forests and GLOBE protocols created a more integrated view about the conservation of the forested areas with native species. In addition, the teachers received appropriate tools to conduct activities for their classes in conjunction with the Plant for the Planet campaign. 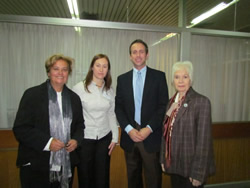 Beatriz Vázquez, International Master Trainer from the GLOBE Regional Help Desk Office in Argentina, led activities on Earth System Science and Land Cover, including Green-Up and Green-Down protocols. Vázquez also taught practical activities and led participants on a field trip so they could practice taking scientific observations and measurements using their handmade instruments. Another special guest, Angeles Camacho, Biologist and Advisor to the National Directorate of Environment, developed a presentation about the native forests and their biodiversity.To further facilitate the application of biodiversity studies, students received seeds of native tree species such as Anacahuita, Ibirapitá, and Espinillo to plant throughout their study sites. Other important individuals present at the workshop were Luján Jara, the first Country Coordinator for GLOBE Uruguay; Mr. Robert Anderson, Environmental, Technology, Science and Health Affairs Representative for the U.S. Embassy; and Jorge Rucks, the National Director of Environment. 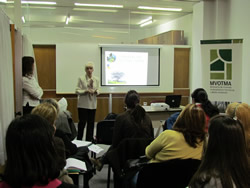 The activities and information presented at the GLOBE workshop in Uruguay motivated educators to provide their students with relevant environmental monitoring tools. The event received positive feedback from its sponsors and, most importantly, allowed participants to plant seeds of scientific knowledge among the students of Uruguay. Congratulations to GLOBE in Uruguay for their great accomplishments!