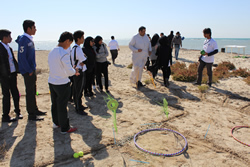 On 29 December 2011 GLOBE Bahrain organized the 7th Annual GLOBE Green Walk event around the original theme "Sense of Place," which focused on the impact of climate change. Approximately three hundred students and teachers from 50 different GLOBE schools participated in the walk, in addition to Press and Cultural Attaché Public Affairs Office representative Brad J. Niemann and Media Coordinator Hind Abdulla Yousif from the U. S. Embassy. The GLOBE Green Walk was held under the Patronage of Nasser Mohammed Al Shaikh, the Assistant Undersecretary for General and Technical Education from the Ministry of Education. The event was sponsored by both the Ministry of Education and the United States Embassy in the Kingdom of Bahrain. 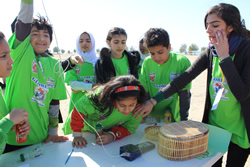 The Green Walk began with a welcome speech from Bahrain Country Coordinator Mrs. Wafa Mubarak Bin Dayna to the teams, followed by a flag salute and the national anthem. The walk was held at the Ministry of Education Permanent Camp where Secondary-level students volunteered as leaders in interactive hands-on activities. They divided students into 18 groups each named for a famous Arab scientific explorer, symbolizing the exciting adventure each group would embark on through the Green Walk. Each of the groups was given a guide providing directions to their first station. Using the driest camp areas with desert plants and the shore areas at the Al Jazaer beach for access to the sea, students spent the day going from one station to the next. 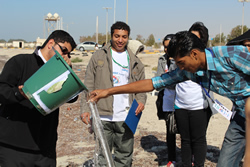 This year's Green Walk offered various games and activities for students of different ages. Elementary and intermediate level students from ages seven to 12 were given different challenges than the 13 to 18-year-old high school students. The goal of each activity was to teach students about the individual site and identify its diverse characteristics. The stations included the Bahrain Gallery, the Land of Lycium, the Impossible Goal, Message in a Bottle, Treasure Island, and several others. The elementary groups activities consisted of Cave of Secrets, Treasure Map, Mermaid, the land of Bisbas (plants with edible bulbs), and the land of Khobais (another local plant). Cards containing different maps from parts of the campsite included information about a specific site that illustrated the goal of each station. Students were also able to check the high and low temperatures, wind speed, air pressure, and wind direction. One of the most interesting elementary stations was the beach cleaning station; students classified waste they found and identified how trash impacts the characteristics of the site. 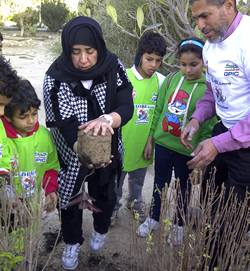 To complete the day, students planted saplings in the camp with the guidance of agricultural engineers from the Ministry of Education. The GLOBE team then presented prizes to the student groups with the highest scores for each station. The volunteers were also presented with thank you gifts for being so helpful in organizing the successful GLOBE Bahrain Annual Green Walk. Students enjoyed the activities and learned a great deal about the relationship between nature and climate.