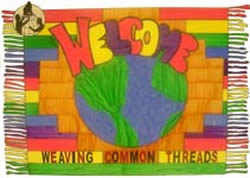 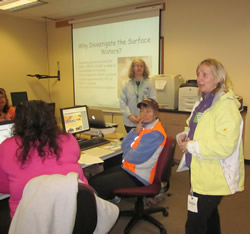 The 2nd Geoscience Alliance National Conference was held 17-18 March 2012 at Salish Kootenai College, a GLOBE Partnership in Pablo, Montana. The conference entitled "Home Places, Local landscapes, Traditional Knowledge and Modern Technologies" was made possible through generous grants provided by the National Science Foundation (NSF) and the National Aeronautics and Space Administration (NASA). Many resources have been developed that help the general public study and face the Earth's challenges, but in Native American communities, these resources are rarely used as there is a limited involvement of Native Americans in the Geosciences field. Despite research developments, the availability of scientific equipment and the internet, there is a technology and information gap within the indigenous communities. "There is a real need for geoscientists on Native reservations," Dalbotten expressed. "Native American students have shown real passionate interest about the future of the Earth, and this field needs new talents from a diverse body of individuals to enhance teaching, research, and practice in our country." In response to such a need, Dalbotten has worked with Antony Berthelote in instituting the first Associate and Bachelor's degrees in Hydrology at a Tribal College or University (TCU) and has worked with Gillian Roehrig (University of Minnesota) along with a NASA supported STEM program called, CYCLES: Teachers Discovering Climate Change from a Native Perspective. Berthelote informed us that "these new degrees will be the foundation for students to return to their respective tribal communities as native leaders capable of giving voice to the water issues of today and tomorrow. Twenty-seven percent of U.S. freshwaters originate from or flow through tribal lands and yet our nation only produces about 30 Native American geoscience graduates annually, which highlights the geosciences as one of the least diversified professions in the U.S." 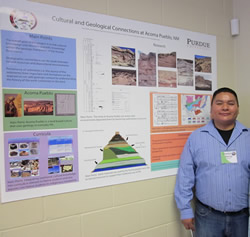 The Geoscience Alliance's vision is to strengthen Native American communities from within, by getting more Native American participants involved in research on their native lands. "By giving them the autonomy to perform their own studies, they will rely less on outside research when it comes to the Geosciences", stated Berthelote. Native American researchers and educators who are connected to their reservations know the needs of their own communities, and therefore research studies and K-12 educational curriculums presented at the conference were designed to address the needs of their communities. 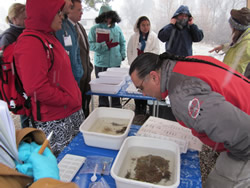 Students, educators, and researchers, all possessing an interest or background in Geosciences, arrived at Salish Kootenai College on 16 March 2012. The conference commenced with a Native American welcome ceremony and dinner, followed by two days of networking amongst participants and workshop activities held by the Consortium for the Advancement of Hydrologic Research, Inc. (CUAHSI), the EarthScope Program, Watershed Education Network (GLOBE/WEN), National Lacustrine Core Facility (LacCore), NASA Innovation in Climate Change (NICE ), and the National Consortium for Atmospheric Research/University Consortium for Atmospheric Research (UCAR/NCAR). Participants signed up for a maximum of two workshops that would guide the activities they participated in. Following the workshops, participants had the option of viewing a 90-minute documentary called "Place of Falling Waters". The film portrays the history of the relationship between the Salish and Kootenai tribes and construction of the Kerr Dam that took place in the 1930s within the Flathead Indian Reservation. Dr. Dalbotten uses cases like this one to broaden awareness of the impact construction has on the land and its natural resources. Her organization strives to take into account the advantages as well as disadvantages to the land when large construction projects occur.

A panel of four participants also offered a questions and answers session at the conference. Panel members included Geoscience Professor Antony Berthelote, GLOBE Partner and Native Elder Holly Pellerin, Althea Walker, a student at Arizona State University, and John Gierke, Professor of Geological & Environmental Engineering at Michigan Technological University. The panel helped participants understand research projects, funding availability, mentorship and other resources available to Native American students pursuing Geoscience degrees. The presence of Native Elders at these conferences provides the mentorship and encouragement students need to seek higher education. The presence of Native American students currently pursuing higher education provided useful insight as to what native students can accomplish and give back to their community. Professors and researchers shared information about the research topics that are available in the field of Geosciences, the requirements that are expected of those who want to pursue these topics, and the grants that are available to fund a Geoscience degree. 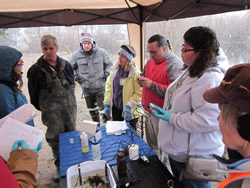 GLOBE partnered with Watershed Education Network (WEN) to offer GLOBE Hydrology training and watershed education. Led by GLOBE U.S. Partners Dr. Georgia Cobbs (University of Montana) and Doug Crebs (Stone Child College); and GLOBE Trainer and WEN co-founder Deb Fassnacht, participants learned how the aquatic life has adapted to flowing water, such as Mission Creek compared with aquatic life in ponds, such as the pond on the SKC campus. According to Ms. Fassnacht, "WEN has 16 years of hydrology data from western Montana and we are in the process of entering this data into the GLOBE database." While showcasing biological monitoring, Deb and WEN AmeriCorps member, Will Ridlehoover engaged the groups in activities included the identification of freshwater macroinvertebrates. They provided interactive methods to use in the field to help children learn and remember hydrology related observations. Movements that mimic how aquatic insects get oxygen were demonstrated to aid memorization. Educators, students, and scientists were encouraged to promote GLOBE's hands-on activities to study water quality and watershed projects upon returning to their communities. SKC Professor Bill Swaney shared his expertise in hydrology concepts, macroinvertebrate identification, and provided traditional native knowledge and ideas for GLOBE activities while studying river biological life.

Mr. Doug Crebs has been implementing GLOBE at Stone Child College in Box Elder, MT since 2001. "The Cree culture has had a profound influence on my worldview," shares Crebs. "My goal is to submit at least 30 years of (GLOBE) atmospheric data; since Climatologists say that 30 years is the minimum amount of time necessary on which to base empirical speculations regarding climatic changes." 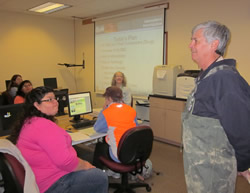 Salish Kootenai College was an ideal location for the 2nd Geoscience Alliance Conference. "Located in foothills of the Mission Mountains, SKC primarily serves the Confederated Salish, Kootenai, and Pend d'Oreille Tribes of the Flathead Nation," explained SKC Professor Antony Berthelote, "however, our enrollment includes students from over 80 different Indian Tribes across the U.S."

Conference participants came from as far away as Alaska, Hawaii, and Florida with Native Americans from various tribes throughout the country representing their communities. This included GLOBE Partners Mr. Mansel Nelson who serves Native American students and educators at Northern Arizona University and Ms. Nicomas Red Horse who serves educators and students at the South Dakota Game, Fish & Parks.

The participants of this conference not only learned about how they can help their communities by getting involved in the Geoscience field, but tribes throughout the nation were also able to learn from one another about their unique climate zones, natural resources and local challenges. While a Native American from Alaska will face different environmental challenges than a Native American from Florida, by coming together, the conference raised awareness of the need for more Native American Geoscientists. 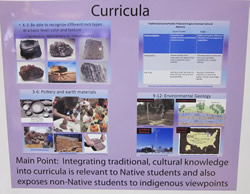 It is the hope of all who contributed to the Geoscience Alliance National Conference that the participants involved with research and education, who understand the technologies and resources available to them, will be better equipped to help educate and support their local Native American communities. In addition to continually working with educational and scientific institutions on improving their curriculum, Native American researchers will be able to help the outside community in understanding their culture and the need to preserve it.

View a brief recap of the 2012 Geoscience Alliance National Conference on YouTube.