On 1 February 2003, NASA's space program experienced a great tragedy as space shuttle Columbia exploded upon re-entry into Earth's atmosphere, resulting in the deaths of all seven crew members. One of those crew members was Israel's first astronaut: Payload Specialist Colonel Ilan Ramon. To honor Ramon and the 9th anniversary of the Columbia tragedy, NASA astronaut Col. William McArthur Jr. traveled to Israel to commemorate the country's first astronaut and to encourage Israeli youth to be involved in sciences and space research. McArthur's visit was part of a yearly "Space Week" program during which the Ministry of Science and the Ramon Foundation invite leading space scientists to come and visit Israel to promote STEM (science, technology, engineering, and mathematics) education and encourage students to follow their dreams. 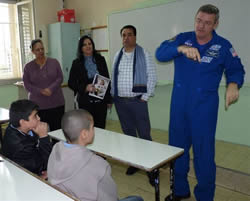 On 2 February, one of Israel's GLOBE schools had the privilege of hearing McArthur speak. The Collège Des Frères of Old Jaffa is a multi-cultural school that places a strong emphasis on environmental science classes. GLOBE Israel Country Coordinator, Farid Hamdan, described the event as "a very exciting time" and said that it was good to hear the students communicating in English. McArthur told the students that he waited more than 10 years to become an astronaut. After NASA finally accepted his application in January 1990, McArthur became an astronaut in July 1991 and has been leading activities with NASA's astronaut office since that time. McArthur has participated in four space flights and logged more than 224 total days in space. 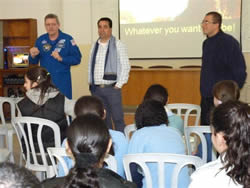 The main message McArthur relayed to the students was that with hard work and determination dreams are always attainable. After talking about his decade-long wait to achieve his own dreams, he went on to show videos of himself and his crew members in the International Space Station, as well as their earlier underwater training to prepare them for space. Being underwater is the closest simulation on Earth to zero gravity, a fact that greatly fascinated the students. McArthur shared that NASA's goal is to one day send someone to inhabit Mars; he hopes that one day one or more of the students that he spoke to during his visits will accomplish this goal. Hamdan noted the students were so inspired by McArthur that when asked who would like to travel to space in the future, every hand shot up instantly.

GLOBE students presented their recent GLOBE projects. Several students had their projects and posters on display and proudly showed them to McArthur. It was a great privilege and special opportunity for the students to share what they had studied and worked on to such an esteemed space scientist. GLOBE teacher, David Levi, presented an overview of the GLOBE program as well as specific GLOBE Atmosphere protocols. 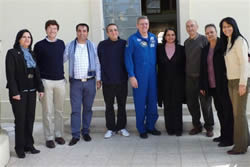 Others present during McArthur's visit to Collège Des Frères included guests from the Science and Technology Administration, the Ministry of Education and U.S. representatives. McArthur's visit was organized and made possible by the U.S. embassy and the Fisher Institute. McArthur went on to visit other science students and centers throughout the country, as well as the Israeli Air Force base where he spoke to pilot cadets. McArthur also lectured in the 7th International Ilan Ramon Space Conference. He hopes that in the future the younger generations will become more involved in space science research because as time goes on, opportunities in the field continue to grow. He encouraged today's generation to take advantage of such opportunities.

Israel joined the GLOBE program on 24 March 24 1995, and it has since been very active with GLOBE. Hamdan works closely with the U.S. embassy and continues to introduce the GLOBE program to various schools and teachers throughout Israel. Hamdan noted, "The opportunity for GLOBE schools to hear fascinating speakers such as Col. McArthur demonstrates the reciprocal relationship GLOBE Israel has with the U.S. embassy."