Uruguay Students Look for Life in the Miguelete Stream 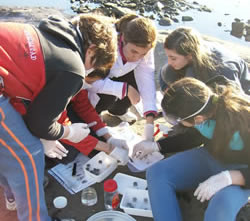 Since Uruguay joined the GLOBE Program in 1995, students and teachers have been involved in intensive research projects that aim to improve understanding of the environment amongst themselves and their community. The Republic of India Primary School No. 85 is one of the most productive in Uruguay thanks to the work of dedicated GLOBE teacher Patricia Píriz. Since 2010 students in this school have been involved in a research project to verify the presence of aquatic macroinvertebrates in the Miguelete Stream, one of the most important water sources in Montevideo. The stream measures 22 kilometers in length and crosses the city from north to south. It was at one time a preferred site for locals to walk and relax but has become so polluted in recent years that in 2003 it was categorized as a "dead watercourse" by "Geo-Uruguay Juvenil," the document on the state of the Environment in 2003. The same was reported by the "Primer Informe Ambiental Montevideo" (IMM) in 2001 when the only existence of an arthropod, an annelid, and a mollusk was reported in the Miguelete. 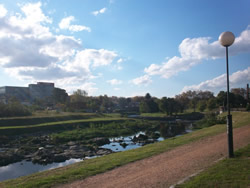 The students' research was developed around the benthic community of organisms that live in the bottom of water bodies and bring together 70 percent of the living aquatic animals. Within this community lives a group of organisms called benthic macroinvertebrates, small animals without bones that are larger than 1 millimeter and live next to the rocks at the bottom of water bodies. The first step in this research was to gather information about the stream and aquatic animals of the Miguelete. Next, students chose a study site and followed GLOBE's protocol for obtaining water and macroinvertebrate samples. Throughout the process, a specialist on the subject was consulted to support the specific identification of the benthic organisms found. 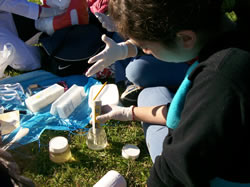 Students wanted to investigate whether their results would reflect the 2003 findings that deemed the water unfit for aquatic life or the more recent study in 2004 that reported conditions had improved. Students found two species of gastropods and two species of crustaceans, representing a great level of diversity present in the stream. They also found two species of fish and observed birds wading and feeding in the stream. This research supported the 2004 declaration that the study site was "recovered" thanks to the Recovery Plan and the Special Plan for the Miguelete Basin. The Electrical conductivity and pH measurements reported by students were similar to those obtained by the Environmental Quality Laboratory, Department of Environmental Development of the Local Administration of the Montevideo City published in the Annual Monitoring Program of Water Bodies of Montevideo in 2009.

Benthic macroinvertebrates are capable of recognizing the conditions of water bodies where they live. Two taxa that are somewhat tolerant of pollution, an amphipod crustacean Hyalella curvispina and a decapod crustacean, were found in the Miguelete Stream. Two others, a gastropod planorbid, and other físido, were found to be vulnerable to contamination. This indicates that the stream is moderately polluted but not a "dead watercourse" due to the existence of at least 4 different species of benthic aquatic invertebrates. 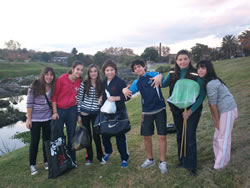 Ms. Píriz stated, "The results found by these students are important to share with the Environmental Quality Laboratory of the Municipality of Montevideo (IMM), the institution responsible for monitoring the Miguelete Stream. It is our hope that the institution can use this information in making decisions." As part of the work projected for upcoming years, the students want to determine more accurately the population of macroinvertebrates in the area, and other areas of the Stream to make comparisons between different locations along the parent river that the stream belongs to.

The students in Uruguay and their teacher Mrs. Patricia Píriz have done an outstanding job to link her students with local scientists and to contribute locally relevant environmental information to promote scientific education in younger students.