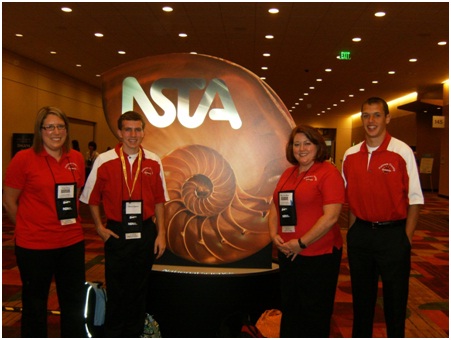 Science students, teachers, and administrators from across the U.S. and 41 other countries met in Indianapolis, Indiana, for the annual National Science Teachers Association (NSTA) conference on 29 March – 1 April 2012. Among those attending were Caleb and Tanner, two students from Poca High School in West Virginia who were invited to present their GLOBE Soil Research Project at one of the world's largest organizations dedicated to science education. The students were chosen by their chemistry teacher Mrs. Maureen Miller because of their interest in science, dedication to their studies, and willingness and excitement to speak to a large group. They were accompanied by Mrs. Miller and Winfield Middle School science teacher Ms. Erika Klose. The two students presented to scientists, teachers, and students from all over the country who gathered to represent scientific disciplines. When asked about his experience at the 2012 NSTA Conference, Caleb stated, "The conference was a great experience and reinforced my decision to pursue a science-related career. Presenting at NSTA was a once in a lifetime opportunity!"

The project they presented was the result of a collaborative effort between Ms. Klose's 6th grade science class at Winfield Middle School and Mrs. Miller's Chemistry I class at Poca High School. The project integrated core concepts from both Chemistry and Geographic Information Systems. Ms. Klose's 6th grade class plotted the experiment sites using GPS equipment at the Wetlands of Winfield. Working as a team, students from both schools began by taking samples of soil and obtaining the soil temperature using laser thermometers. Samples were obtained using GLOBE Protocols and brought back to Poca High's Chemistry lab for further analysis of the soil's moisture content, pH Level, and nutrient content such as nitrogen, phosphorus, and potassium. Using ArcGIS technology, the students plotted the data they obtained on geographical maps and were then able to analyze the data.

While the collection period for their research was just one day, the analysis of the soil was done over a period of one week. The students found that as they moved closer to the river, the soil's moisture content increased except for in one location. While studying the content of the soil, the students discovered that there are low amounts of nutrients present in this area, especially Nitrogen. The explanation is that before the wetland property was reclaimed, there was a heavy presence of farms, which absorbed most of the soil's nutrients during that time. According to Tanner, "completing this project required me to research the topic, generate a hypothesis, collect data, analyze it and then present the results, which is exactly what real scientists do every day. This experience reinforced my plan to become an engineer."

Throughout the project, students were taught to use modern equipment and methods to carry out research. According to GLOBE Partner Mr. Todd Ensign, "the project required them to think and act like real scientists, which created a deeper learning experience." Mr. Ensign has been with the GLOBE Program since 2002 as a U.S. Partner Coordinator for the NASA IV & V Educator Resource Center located in Fairmont, West Virginia and has been consistently recruiting and training teachers on the implementation and use of GLOBE protocols for the past 10 years, including Ms. Klose and Mrs. Miller.

Congratulations to Caleb and Tanner on your achievements in science and the bright future ahead of you!

Read more about GLOBE involvement in the 2012 NSTA Conference.