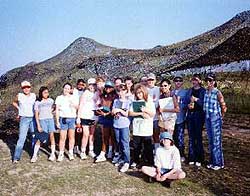 Eighth gradeGLOBE students at Nolan Middle School in Killeen, Texas, have already learned something all scientists appreciate: collaboration is a key to success. They have also come to appreciate that consistency and accuracy are important when sharing data.

GLOBE Teacher Michael Cavanaugh's students are involved in a number of collaborations. They communicate through GLOBE Mail with GLOBE students at Belton Junior High in Belton, Texas, and they have provided biome information for a student at Tabor Academy in Marion, MA. Mr Cavanaugh's classes are comparing their data with GLOBE schools in Australia that have provided consistent data.

"I tell the kids that scientists need data from every day, including holidays," Mr. Cavanaugh says. "When we look at data from other schools to compare and contrast, we look for schools who have a lot of data. And we know when scientists look for useful data, they are going to be looking at the schools with the most consistent data." 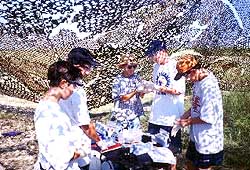 "I enjoy taking hydrology samples from Pershing Park Lake and testing them," says Katie McQuade. "I also like the idea that kids, and scientists, all over the world can look at the data we have collected."

Nolan Middle School has been has been aided in its effort by the United States Army. The Fort Hood Chapter of the Armed Forces Communications Electronic Association (AFCEA) awarded Mr. Cavanaugh $1,000 to help purchase GLOBE scientific instruments and equipment. Nolan Middle school also has an ongoing partnership with the Army's 16th Signal Battalion, stationed at Fort Hood. The soldiers have helped by setting up camouflage nets for shade and tables for the GLOBE students to use at their hydrology site.

"GLOBE is a fantastic program because it gives us so much," Mr. Cavanaugh says. "My ultimate goal is to have the 6th grade doing atmosphere, the 7th grade doing hydrology, and the 8th grade doing soils and biometry. GLOBE is adaptable to any special program."