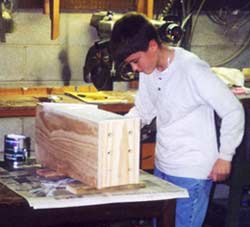 Eagle Scouts are leaders, and young Patrick Keal led his school to the GLOBE Program. Patrick, who has just graduated from eighth grade at St. Albert the Great School, was awarded the school's "110 Percent Memorial Award " named after a student who was known for always giving his very best. Principal Jeanne Flowers cited Patrick for his "persistence and unwavering perseverance while pursuing his goals" -- including GLOBE -- as well as his "kindness towards others." 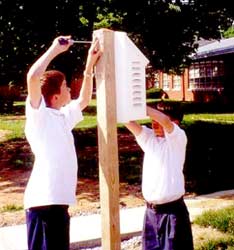 "I heard about GLOBE and went online to learn more about it." Patrick said. He then typed up the information on GLOBE and passed it on to the teachers. "I thought it was pretty interesting how scientists are using the students to collect information to learn about the globe," Patrick says. Says Mrs. Burke: "He really built the enthusiasm among the teachers." The school investigated the program and liked what they saw. With support from the archdiocese, St. Albert the Great sent third-grade teacher Jane Burke and second-grade teacher Lois Rothgerber to be trained. Patrick worked with his scout troop to help raise funds for GLOBE equipment. He also contacted several companies for donations, and, with other scouts and his dad, built the instrument shelter. Mrs. Burke and Ms. Rothgerber plan to work with other teachers at the K-8 school so that GLOBE can be used in many grades. Ms. Flowers noted that by bring GLOBE to the school, Patrick contributed greatly to the academic curriculum.

Next year, Patrick goes on to a high school that hasn't joined GLOBE - yet.