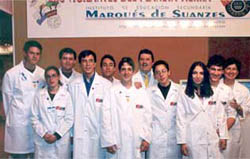 The students and the teaching staff of Marqués de Suanzes centre for Secondary Education, Madrid (Spain), have been awarded first prize in the 17th round of grants awards by "El Corte Inglés" (the largest company in the field of distribution in Spain-Europe). The grants have been awarded to facilitate investigative studies with the title theme of "Investigate and Explain your Environment".

The study undertaken by the School bears the title "Different climates, different worlds: Together on Earth". It takes as its main objective the analysis of divergent cultures engendered from their beginning from climatic differences, aiming to explain more comprehensively, differences in humanity based on the study of their geographic locations.

Marqués de Suanzes Secondary, was historically the first scholastic centre in Spain to partake in the GLOBE programme, aiming to widen its scope of studies and, at the same time, open horizons and research opportunities for their enthusiastic students.

The study takes as its basis of investigation, different places in Spain and in the World which, by reason of latitude and longitude, altitude and proximity to sea-level, may conform to differencing characteristics which have become recognized as representative for their own geography.

The climatic GLOBE data to be studied was gathered by the students themselves as part of their on-going GLOBE project and also utilizes data previously published on the GLOBE web page:http://www.globe.gov/ 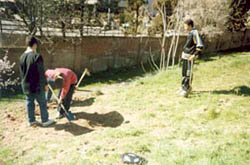 The organization, classification and research utilizing all the data gathered is done via a shared Web site which has been made available to them by the Polytechnic University of Madrid(You can use "usuario " (user): GLOBE and "clave"(password): GLOBE), and also via the Marqués de Suanzes Secondary Web site.

Their study will be complete in June, culminating in an open exhibition, to which all Centres of education are invited. This invitation is extended, likewise, to all those who may read our publications in the GLOBE Web pages. To see their report (3 MB PDF written in Spanish) click here.